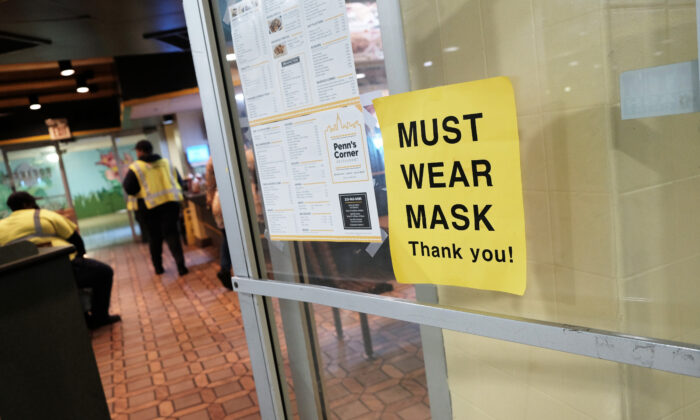 A sign on a door asks people to wear masks in downtown in Philadelphia, Pennsylvania, on April 15, 2022. (Spencer Platt/Getty Images)
Viewpoints

The United States appears to be coming out of more than two years of societal upheaval related to mask and vaccine craziness. Americans want to move on.

The Democrats seem to sense this, and for the most part have suddenly seized upon “Re-Opening America.” The beat down the Biden administration received over the airline mask issue seems to be the pivotal tipping point, but the administration is considering a counter-attack on this matter, so we should stand by as the Deep Staters prepare to strike back.

The societal impact of the CCP virus has been historically significant. The virus outbreak led to the unhinged Color Revolution violence of the summer of 2020 and a suspect election in America that a growing number of citizens deeply question. This issue isn’t going away, Americans are relentlessly pursuing the truth, and the move to de-certify the 2020 elections is a “wound that will not heal.”

With all polling looking bad for the Democrats for November 2022, part of what may be driving the numbers is the reaction to what the nation just went through—harsh lockdowns, forced vaccinations, and a rise of totalitarianism in America. With all this, though, we should look at the positives of what we learned during the tumultuous era of the CCP virus in America.

With virtual classes, many parents who were also home because they were unemployed or forced to work from home spent time seeing their children’s teachers in action. And what they saw, they didn’t like. I would suggest this is one of the precursor elements that caused the “Loudoun County” effect (i.e., the parent uprising in Loudoun County, Virginia). The instances of crazed teachers aggressively proselytizing for alternative lifestyles and attacks on any dissenting viewpoints are countless and have become a staple of social media.

The simple act of sharing these instances of social media derangement has become a culture war flashpoint and has been weaponized against individuals with the temerity to link to these clips. A Washington Post reporter, Taylor Lorenz, has been accused of “doxxing,” or releasing the personal details of, the person behind the “Libs of TikTok” Twitter account. Lorenz had just publicly denounced the poor treatment of women in media and took it upon herself to attack the woman behind “Libs of TikTok.” Lorenz is now asserting that “Libs of TikTok” may have been established by a foreign actor. When all else fails, blame Russia.

Much of the evidence of the teachers’ behavior came from the teachers themselves, who very willingly shared their thoughts and agenda. The groundswell of parental rejection has been immense and is growing. The November 2021 gubernatorial elections in Virginia were likely led by outrage over this.

The gleeful application of totalitarian control measures has been shocking or exhilarating depending upon one’s leanings. The sudden evaporation of mask requirements is also a good litmus test on this matter. The huddled, shuffling movements of people who have become addicted to masks is obvious to me in public spaces, as is their bug-eyed virtue-signaling glare toward unmasked people. No longer can they mask-shame; Blue governors and mayors are shedding these control measures faster than the remnants of the German Army dropped their equipment and uniforms in March–May of 1945.

Gov. Gretchen Whitmer of Michigan, Gov. Gavin Newsom of California, and whoever is governor of New York or their Blue counterpart mayors are poster children of the tyrannical and arbitrary application of societal control measures. If anyone asks for evidence of the public’s perception of their iron-fisted behavior, the unmistakable population shift from Blue to Red states explains everything. I suspect we are just beginning to see decades of class-action lawsuits for their two-plus years of tyranny plus a continued re-location of the American population.

We Learned That, Yes, Mass Psychosis Is a Thing and Can Be Used Against the Citizens

Related to the tyranny inflicted by mostly Blue leaders is the mass psychosis that rapidly spread in society with the CCP virus. Dr. Robert Malone has clearly identified this phenomenon. As soon as I first saw him on Steve Bannon’s “War Room,” I knew he was one of the best and most reasoned spokespersons against the insanity that many willfully embraced. Malone has been relentlessly attacked by elite society as unhinged, yet, it would appear he has simply been sharing his observations based on his impressive experience.

Dr. Anthony Fauci, Hollywood, the NBA, Blue governors, and mayors all innately sensed and exploited this opportunity to herd compliant members of society at their will. We need a deep reflection on who, what, and how this happened—it was shameful and would not have happened without many willing participants from the citizenry.

We’ve learned many good things, despite the suffering and unexplainable behavior of many during this period. It appears more and more are beginning to dispense with the psychosis of this dark period of American history. We’re experiencing the beginnings of a showdown with the Russia-China axis, we need more citizens awake, not woke, and we need our Churchill back in office to lead us during the incredible period facing us.