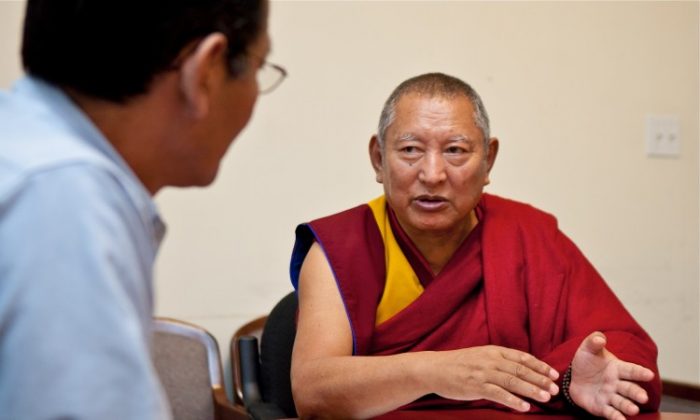 Since March 2010 a dozen young Tibetans have immolated themselves in the Ngaba Autonomous Prefecture in Sichuan Province, China. That area, and the Kirti Monastery there, has also been the epicenter of the Chinese regime’s attempts to stamp out among Tibetans any demands for religious freedom and basic human rights.

The Supreme Head Lama of all Kirti monasteries in and outside of Tibet, his eminence Kirti Rinpoche, discussed what has driven young people to perform the most desperate act of protest imaginable: self-immolation.

Kirti Rinpoche was previously Religion and Culture Minister of the Central Tibetan Administration in exile. He is one of the many Tibetans who followed the Dalai Lama into exile in 1959 and has since re-established the Kirti Monastery in Dharamsala, India. As such, he has very close contact not only with the Kirti monastic communities in and outside of Tibet, but also with the lay people connected to them.

Speaking softly and calmly with the help of an interpreter, Kirti Rinpoche (“Rinpoche” is a Tibetan religious honorific meaning “precious one”) detailed the horrors that the Chinese communist authorities have visited upon Kirti Monastery and the Tibetan community at large.

“It is an outburst of three generations of suffering,” he said, explaining why young people had resorted to self-immolation. “There has been so much repression against the Tibetan people, and the Ngaba area has suffered so much for so long. They could not endure anymore.”

This “wound of three generations” is detailed in his Nov. 3 testimony to the U.S. Congressional Commission on Human Rights.

Ever since the Red Army destroyed and plundered Lhateng Monastery in 1935, and continuing with the horrors of the Cultural Revolution, the Tibetan people in Ngaba have been subjected to a cultural and physical extermination campaign: looting, defiling and destruction of temples, mass arrests, torture, executions, public “struggle” sessions, starvation, and, in recent years especially, a concerted effort to force the community to pledge allegiance to the communist regime and denounce their spiritual leader, the Dalai Lama.

After the large-scale protests in Tibet in March, 2008 and the bloody crackdown that followed, the Chinese regime has stepped up its repression of Tibetan monasteries.

The Kirti monastery in Ngaba has since been turned more or less into a prison, or “re-education” camp. The whole area has been cordoned off, and more than 800 Chinese officials have moved in, to perform so-called “political re-education” and “patriotic education.”

In practice, this means that the whole monastery has been divided up into groups of 20 who spend most of their days listening to endless lectures designed to make them loyal to the Chinese Communist Party. These are followed by sessions where the monks must “share their opinions,” but where any opinions disagreeing with what has been taught are answered with beatings.

At night, random searches of the monk’s quarters occur, and the whole place has been equipped with closed-circuit TV cameras, listening devices, and watchtowers. Monks are forced to stamp on photos of the Dalai Lama and holy scriptures are cut to pieces with knives. Hundreds of monks have been rounded up and detained at unspecified locations, where many are subjected to torture.

The desperate acts of self-immolation started in February 2009, when 27-year-old monk Tapey set himself on fire. Since then 11 others have followed suit, with repression against the community and their relatives increasing as a result.

Since he lives in exile in India, Kirti Rinpoche did not know any of them personally, but he declared that as their spiritual teacher, he feels very close to them nonetheless.

“From a Buddhist perspective, it all boils down to motivation,” he said. “Action is important, but motivation is more important. The action itself may not be appealing, but their motivation was pure; they wanted to benefit others, alleviate the suffering in their community.”

To illustrate his point, he mentioned the story of how Buddha in a previous life threw himself off a cliff to feed a starving tigress and her cubs with his own flesh.

Rinpoche indicated that it is not possible to generalize about whether these acts are encouraged or discouraged by the monastic community, that it all depends on the individual situation. He said they are typically spontaneous acts that others are not informed of beforehand.

The suffering the immolation manifests is carried away by all those who see it, however, and it creates sympathy, he said. “People feel that they are part of it.”

The acts of the self-immolators may be extreme, but they have indeed brought the world’s attention to their shared demands: freedom for Tibetans, religious freedom in Tibet in particular, and permission for the Dalai Lama to return.

Rinpoche said that although he hopes that the international community can put pressure on the Chinese regime, it is basically up to the regime itself to stop the repression and instead implement rational policies, so that people can lead a normal life with basic human rights. This is the only thing that can defuse the increasingly explosive situation, he said.

But at the end of the interview, he also mentioned that, from a broader perspective, morality is the key issue for China.

Rinpoche took the recent case of little Yueyue as an example of what happens to a society when morality degenerates, and that the repression against the Tibetans reflects the same lack of morality among the Chinese leadership. Once the leaders’ morality improves, it can also improve among the people, having a positive impact on society.

“Whether you are a religious believer or not, improving morality can only facilitate this ‘harmonious society’ the regime so often talks about,” he said.