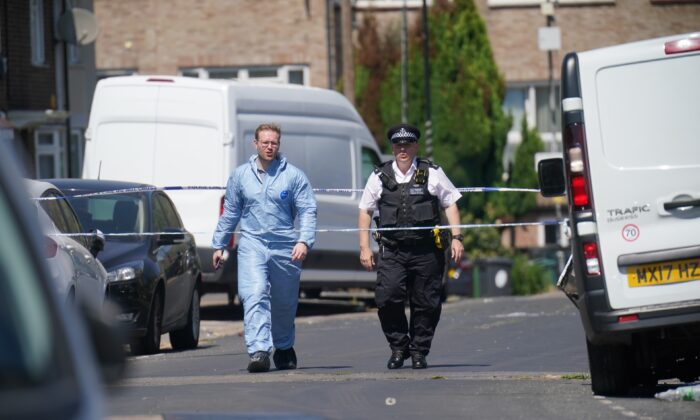 Police near the scene where a 28-year-old man died after a shooting at a gathering in Waltham Forest, in east London, on July 24, 2022. (Jonathan Brady/PA Media)
UK

Three people have been shot dead in six days in separate killings in London.

The most recent was a man believed to be aged in his 20s who was gunned down around 9.30 p.m. on Sunday in Wood Green, north London.

Police including armed officers were called to High Road near Wood Green Tube station where they gave the victim first aid.

Despite treatment by medics from the land and air ambulance, he was pronounced dead at the scene at 10 p.m. His family have been told.

He was taken to hospital but later died.

Locals said they had been expecting trouble when a group of up to 100 people gathered in Cheney Row Park.

One man, who did not want to be named, said: “I did see earlier more and more kids showing up so we thought… there would be a fight.”

A second man was taken to hospital at the same time as Brown with stab injuries. He was later discharged and arrested “in connection with the incident”, the Metropolitan Police said.

The two fatal shootings follow another killing in the early hours of Tuesday July 19, when a 26-year-old man was shot in Bruckner Street, Queen’s Park, west London.

Seven people were arrested over the death and later released under investigation.

This number of fatal gun deaths in less than a week is unusual in London.

In 2021, there were 12 fatal shootings among a total of 134 homicides recorded by the Metropolitan Police.