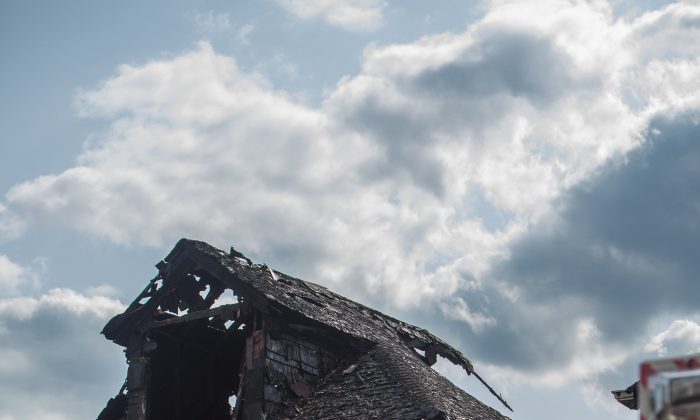 The smell of burnt paint and wood slowly waned as Chelsea Howard, 18, stared in the direction of her former home.

“This is just like crazy,” she said, with a hint of resignation. She picked up her phone, dialed a number. “My house is burned down,” she started the conversation.

Howard knew that what hadn’t succumbed to the flames was likely soaked by the hoses. “This is my last outfit,” she said, assessing her remaining possessions.

“I really have to start over,” said Howard.

The fire started in Howard’s home, 4523 Hill Ave. around 2 p.m. and quickly spread to 4519, where Rowatie Sanicharro lives. Sanicharro heard someone screaming “Fire! Fire!” then came out of her house and saw the massive flames leaping out of the neighbor’s window.

Firefighters were on the scene quickly, she said. They wouldn’t let her go back, so she could only watch her material life being reduced to ashes. A T-shirt, pants, and flip-flops were all she had left.

FDNY wouldn’t speculate on the cause of the fire.

Howard’s grandmother and her five sisters were at home at the time and all of them made it out safely as well as all of the affected neighbors.

But the old, wooden houses of the neighborhood offer little resistance to combustion. “I don’t know how the fire got that big,” said Bay Ouma. Her father leased the second floor of the house that Sanicharro lived in.

The Red Cross is offering shelter, food, and counsel to the victims.