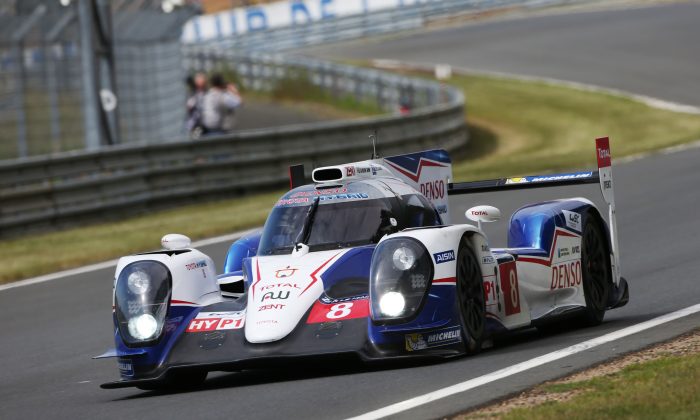 The 24 Hours of Le Mans is the focus of the sports car racing world—the most important event of each season, the most prestigious victory a team can achieve. It is also the most important economically, offering increased sponsorship for the teams and endless promotional opportunities for the factories.

In its 82nd edition, the Le Mans 24 attracts major auto manufacturers, small specialty constructors, and the best drivers from around the world from every discipline of motorsports. 164 drivers in 56 different cars will contest a full day of racing at Le Mans this year, all seeking the sport’s highest reward.

The 2014 Le Mans 24 Hour race promises to be one of the most exciting of the century, because the length of the roster of potential overall winners.

Since the turn of the century, Audi has faced only one well-funded factory opponent at a time—Peugeot for much of the first decade, Toyota for the past two years. Peugeot had a budget to match Audi’s; Toyota, less than half it is rumored (no official numbers are ever published.)

For 2014, Porsche has shown it will spend as lavishly as Audi, building a new factory and an entire new arm of its business just to compete in World Endurance Championship events. Toyota is still reportedly spending less that the two German giants. However, the factory has decided its first two seasons showed that racing was a reasonable investment, and has allocated enough to fund a pair of cars for the season—and for Le Mans.

The #1 Audi will need to be rebuilt after Loic Duval’s practice accident. The driving team of Duval, Andre Lotterer, and Lucas Di Grassi won the 2013 Le Mans 24. (Audi Motorsport)

Toyota, running on a budget said to be less than half of its competitors, was quickest in the first practice session. Sebastien Buemi in the #8 Toyota TS 040-Hybrid lapped the 8.5-mile course in 3:23.652, 0.324 seconds quicker than Andre Lotterer in the #2 Audi R18 e-tron quattro. The second Toyota was third quickest ahead of the remaining two Audis, though one—the #1 Audi driven by Loic Duval—crashed heavily during practice.

The car was destroyed but Duval mostly uninjured. Audi will build up one of its spare chassis; no word yet if Duval will drive in the race, or who his replacement might be if one is needed.

The two Porsches, newcomers to the fray, were also slowest of the big prototypes. Brendan Hartley in the #20 Porsche 919 Hybrid was quickest, three seconds off the pace. Porsche showed better pace in the first two WEC rounds, so likely the team is adjusting slowly to the new track and will be much quicker come race day.

All these cars are hybrids: they have internal combustion engines which develop 500 or 600 horsepower, and electric motors which add almost that much in short bursts. The Toyotas calculate that their cars hit 11 horsepower at full throttle and full hybrid release.

Even with this enormous power, the cars are 30 percent more fuel-efficient than in 2013—the 2014 regulations specify maximum fuel usage, forcing the cars to have less environmental impact.

The top class also includes a pair of privateer LMP1 cars, using gasoline engines only. These cars are significantly lighter but only half as powerful. These cars, entered by Rebellion Racing, are mostly undeveloped—the Toyota-powered Rebellion R1s were supposed to be ready for the first race of the season but instead didn’t debut until the second race, Spa. The Rebellions don’t have much chance to win—if they even finish it will be a victory.

Brendan Hartley in the #20 Porsche 919 was slow in first practice, but speeds should improve as the week progresses. (presse.porsche.de)

The largest class is LMP2, with 17 entries. These purpose-built racing prototypes develop 450-550 bhp from their stock-block power plants; they are significantly slower than the LMP1s. The quickest, the #48 Murphy Prototypes Oreca 03R-Nissan driven by Rodolfo Gonzalez, completed a lap in 3:40.737, 17 seconds slower than the quickest Toyota.

LMP2 is a Pro-Am class; every team has to have a mix of purely professional and part-time drivers (though to get a seat as an amateur one needs to be a phenomenally quick and skilled driver.) This means that some of the drivers in each car will be very fast, and some will be much less quick, which adds a layer of strategy—when does a team use its quicker and slower divers?

Each needs to drive a minimum amount of time and each has a maximum. The character of the race will change many times during the course of the 24 hours, as will track conditions. Should a team save its best for the end, or build up an advantage late at night and stay ahead with the Am driver in the morning when there will be less traffic?

The top two classes are prototypes—cars designed and build purely for racing. These are the cars which look like spaceships or fighter jets.

GT cars are built out of cars one might see on the street (depending on where one drives:) Porsches, Ferraris, Aston Martins, and Corvettes.
There are 28 GT cars entered in two classes, GTE-Pro and GTE-Am. As with P1 and P2, the GTE classes can either have all professional drivers or a mix of pros and part-time drivers.

The #91 Team Manthey Porsche 911 RSR driven by Patrick Pilet, Joerg Bergmeister, and Nick Tandy is one of the top contenders in GTE-Pro. (presse.porsche.de)

The GTE-Pro field is disappointingly small at only nine cars, but they are the best nine GT teams in the world. Most of the teams are de facto factory teams. Corvette Racing and Aston Martin racing don’t try to hide their factory affiliations. Manthey Porsche and AF Corse are the Porsche and Ferrari factory teams but don’t use the names (probably so that if they lose the factory name is not in the news as a loser.)

The only privateer is Ram Racing’s Ferrari, but Ram Racing has been in the game long enough battle the factories on level ground.

There are 19 GTE-Am entries; the cars are the same as the GTE-Pro machines, and the drivers are as or almost as fast.

With smaller budgets and less development, it is likely that the best GTE-Ams will be a bit slower than the GTE-Pros over the course of 24 hours, but in practice an Am driver, David Heinemeier Hansson in the #95
Aston Martin Vantage, was quicker than the quickest Pro driver, Gianni Bruni in the #51 AF Corse Ferrari.

Here is the entire schedule:

Timing and scoring can be found at the official Le Mans 24 site.

Radio Le Mans, hands down the best sports car broadcast team on the planet, will be covering practice, qualifying, and the race.