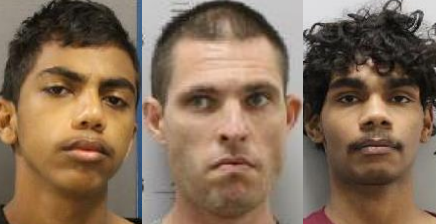 All three men who escaped from the Barkly Work Camp prison in Tenant Creek on Saturday night have been apprehended by Northern Territory (NT) Police.

Two of the escapees, Maximus Cutta (20) and Richard Henwood (37), were arrested in Tenant Creek on Thursday afternoon after avoiding police for five days, while the third escapee, Ezra Austral, remained at large for several more hours.

The 23-year-old was taken into custody in the Tenant Creek township on Thursday evening.

The trio had fled the work camp on Saturday night at around 11:30 p.m. after allegedly removing their electronic monitoring devices and stealing a silver 1996 Nissan Navara two-door tray back ute.

Territory Duty Superintendent Mark Malogorski said that the Territory Response Group, Crime Command, and general duties officers were all involved in the search for the escapees, with roadblocks having been set up north and south of Tennant Creek and in the Katherine region.

NT Police also thanked the public for their assistance.

It holds open-security prisoners, so no sex offenders or prisoners of public interest are placed at the camp.

Prisoners must follow a strict regime that involves giving back to the community through working on community enhancements, maintenance and beautification projects.

NT Police are also calling for witnesses to an alleged assault of a child in Darwin on Thursday afternoon.

According to a NT Police media release, at around 4:30 p.m., police received a report that a man had entered the front yard of a property on McMillans Road in the suburb of Anula and allegedly assaulted an 8-year-old girl.

She managed to break free and call for help while the assailant lept over the fence into a neighbouring property.

A resident pursued the man, apprehended him on a footpath, and held him there until police arrived.

The 25-year-old offender was arrested at the scene and remains in custody, awaiting charges.

Detective Acting Senior Sergeant Jon Beer said the girl suffered minor injuries and was very brave in resisting the man and getting away.

“Investigations are continuing to determine exactly what happened, and we urge anyone who saw this incident or other unusual activity in the area to contact police,” he said.

Meanwhile, social visits to all correctional facilities in the Territory, including work camps, have been suspended until Sunday, Jan.23, due to cases of COVID-19 being detected in several centres.