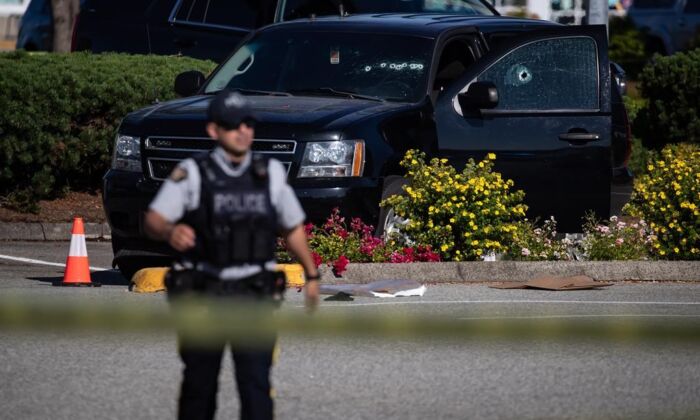 Bullet holes are seen in the windshield and passenger window of a police vehicle at the scene of a shooting, in Langley, B.C., on July 25, 2022. (The Canadian Press/Darryl Dyck)
Canada

Three Dead, Including Suspect, in Shootings in Langley, BC, Say RCMP

A series of deadly shootings that police have said involved “transient victims” in Langley, B.C., started about six hours before RCMP issued a cellphone alert warning the public, by which time the alleged gunman had already been killed.

While police have said they are working to confirm if the victims were homeless, the attack is also drawing calls from advocates to reduce discrimination against the vulnerable population and increase safety.

Two people were killed in the attacks and two others were injured before the police fatally shot the suspect.

The shooter has been identified as Jordan Daniel Goggin, 28, although police have released no other details on the man or his possible motives.

Police have said the man is known to them, but said later in a news release the contact was “non-criminal.”

Sgt. David Lee of the Integrated Homicide Investigation Team defended the timing of the alert after the last shooting occurred, saying it was issued when police were able to tie the events together.

“The alert was done at the appropriate time as the information became known to us and a proper risk assessment was done,” Lee said.

Police outlined the series of attacks that spanned four different scenes in both Langley City and the Township of Langley over nearly six hours.

The first shooting took place around midnight at Cascades Casino and a woman was critically injured. At 3 a.m., the shooter proceeded to Creekstone Place, a supportive housing facility for people transitioning out of homelessness, where a male was killed. At 5 a.m., the gunman went to the Langley City bus loop, where a second male was killed, and at 5:45 a.m., he shot another man in the leg near the Langley Bypass, Lee said.

That’s where police intercepted the suspect, fatally shooting him.

At 6:20 a.m., a blaring alert rang out on cellphones across Metro Vancouver, saying police were at the scenes of several shootings. At that time, RCMP said they were unsure if the shooter was alone and warned people to stay out of the downtown core of the city.

A second alert was issued around 7:20 a.m. saying the suspect was “no longer a threat,” and police later said a man they arrested was thought to be responsible for the shootings.

A third phone alert was issued around 3:30 p.m., to announce the cancellation of the previous warnings.

Despite the alerts, a woman who worked at a gym across from one of the shooting scenes said officers never knocked on the door to warn of any danger.

Kathy Eiriksson was working reception at the Fitness Unlimited Athletic Club, when she said she saw about a dozen police cars pull into a parking lot across the street near a bus loop at around 5 a.m.

Officers had their rifles out and two ambulances were also on scene, she said.

It was more than an hour before the first phone alert rang out, and most police had left the area by then, she said.

“It was a bit shocking,” she said of learning the details.

Commuters were also getting on and off buses at the bus loop, she said.

Bhayani said investigators don’t know the motive behind the shooting or if there was a relationship between the shooter and the victims.

“While the investigation is ongoing, all indications are that there was nobody else involved and there’s no further ongoing threat to public safety,” he told a news conference.

Lee said the suspect is known to them, but it’s unclear if any of that history could have led to what happened.

The initial alert had described the suspect as a Caucasian man with dark hair, wearing brown overalls and a camouflage T-shirt with a red logo on the right sleeve.

Yellow police tape surrounded a sandwich shop and a parking lot near the scene of the final shootings Monday. A forensics tent had been set up over one of the crime scenes.

Outside the Spence Diamonds store at the Langley Centre nearby, the windshield and driver’s window of an unmarked black police SUV were peppered with bullet holes.

A white four-door sedan with its licence plates covered was parked next to the forensic tent a short distance from the SUV. In their first alert, police had warned that the suspect was associated with a white car.

Not far from there orange cones surrounded a blue sleeping bag and a bicycle, while a pair of shoes and a piece of clothing were taped off in the middle of the street.

“We’re strong, we’ll get through this,” she said. “We need to be kinder, and we need to work together.”

She encouraged anyone affected by the shootings to seek counselling.

Van den Broek also said she hopes the attack shows the need for increased federal funding and co-operation between all levels of government to improve care for people who are homeless.

“Maybe this is the catalyst for moving forward.”

Leith White, pastor at Langley Vineyard church, which is located near the bus loop where the third shooting occurred, said the community is shaken by the attacks.

The church offers hot meals and does other homeless outreach. Based on photos of a backpack and bike linked a crime scene, he believes one of the victims attended a meal Sunday night.

“Shocking, tragic, horrific — those are words that have come up in conversations today,” he said. “But sadly, I think to some degree it’s not that surprising.”

White said tensions have risen since dozens of people were pushed onto the street beginning in March, when programs that provided temporary housing during the COVID-19 pandemic were shut down. For two years, up to 100 people were housed in hotels that gave them security as well as access to support workers, he said.

The attacks highlight how dangerous it is to live on the street and the urgency of finding better solutions, he said.

While no motive has been identified, two advocates who work with people who are homeless in Vancouver said community members experience stigma and violence.

Ryan Sudds said there’s a “dehumanization of people who are living on the streets or in parks.”

Fiona York said British Columbia has about 9,000 people who are without homes.

Langley’s homeless population is about 200, she said in an interview, although the estimate predates COVID-19 and is likely higher. Van den Broek put the number at 300.

The transient nature of the population adds a challenge, York said.

“It’s really hard to count people who are homeless and so these numbers are usually quite low,” York said.

“Our hearts go out to the family and friends of those effected by this senseless act of violence in our Township of Langley and the neighbouring City of Langley,” the statement says.

Public Safety Minister Mike Farnworth said police always do a review following any alerts, which in this case were sent to some parts of Vancouver Island.

The decision was based on lessons learned from other incidents, including in Portapique, N.S., in 2020, when police failed to alert residents about an active shooter who ended up killing 22 people.

“They made decisions based on the information that they had, ensuring public safety,” Farnworth said of the cellphone alerts sent in B.C.

“The area where the shootings took place is a very high-traffic area, very densely populated. Communities use it going all the way from Chilliwack, Abbotsford, coming through the valley and likewise coming from Richmond, Vancouver going out that way. So, there would be a wide-ranging alert in place.”