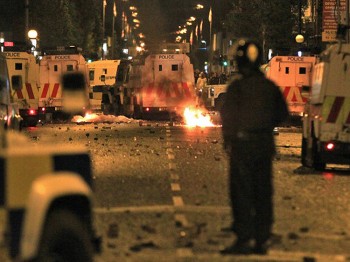 Three civilians have been shot and wounded during ongoing riots between nationalists and loyalists in the Short Strand community of east Belfast, Northern Ireland.

Two of the civilians were injured on Monday, the first night the riots broke out, reported the Belfast Telegraph.

The other civilian, a press photographer, was shot the next night by rioting nationalists.

The UVF supports British rule in Northern Ireland and has a history of violent attacks that have resulted in many civilian deaths.

According to Belfast mayor and Sinn Fein party member Niall O’Donnghaile, members of UVF donned masks and initiated the conflict two nights ago.

Both nationalist and loyalist communities have been damaged in the riots, during which bombs and paint have been thrown at houses, there have been exchanges of gunfire and hand-to-hand combat, according to Belfast Telegraph.

The police brought in water cannons to try to disperse the crowds. Local police also called it “some of the worst rioting for years” in east Belfast, reported the Belfast Telegraph.

Alex Maskey, a member of the Northern Ireland Assembly described the scene as “a war zone,” at a house session Tuesday.

“I want to place it on the record that it is absolutely atrocious for any family’s home in this city in this day and age to come under attack,” said Maskey, “no matter what side of the community they are from.”

“We must all redouble our efforts to deal with the underlying issues that fester in those communities,” added fellow assembly member Sammy Douglas.

Irish Prime Minister Enda Kenny decried the attacks as well, and pledged that the government “will continue to work closely with the newly-elected Assembly and Executive in Northern Ireland,” reported the Irish Times.