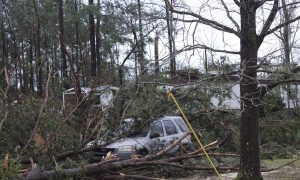 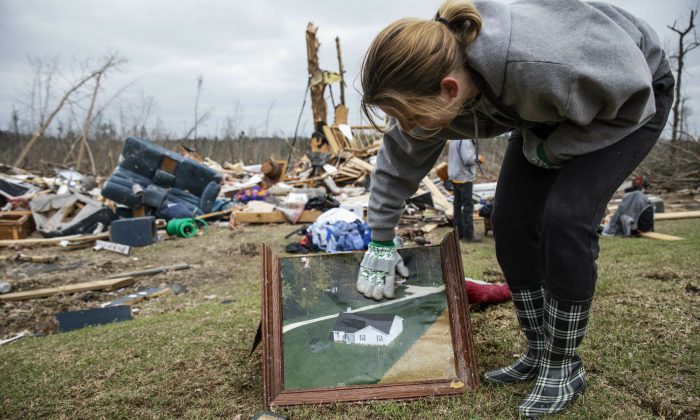 Debris from a friend's home stands in the background as Ashley Griggs wipes away dirt from a photo found in the rubble of what it used to look like before it was destroyed by a tornado in Beauregard, Ala., on March 4, 2019. (David Goldman/AP Photo)
US News

Three Children Are Among 23 Victims Killed in Alabama Tornadoes

An Alabama coroner said at least three of the victims of the more than a dozen tornadoes to hit the state are children—two of whom have now been identified.

Bill Harris, the Lee County coroner, said the three children among the dead were a 6-year-old and a 9-year-old who died at the hospital and a 10-year-old, according to The Associated Press.

“A destructive tornado devastated Lee County, Alabama, leaving many families heartbroken,” wrote Corinthina Hawthorne on a GoFundMe page. “My best friend Kayla Melton was affected tremendously by this. She lost her home, and most importantly her son Armando “AJ” Hernandez.

The boy’s mother earlier posted a request for help in finding him.

Please look for my baby hes 6 years old his name is Armando Hernandez he goes by AJ last seen on lee road 38. Anyone in the area please help me find him please!!!!!

Another victim that has been identified is fourth-grader Taylor Thornton.

Lee-Scott Academy, the school Thornton attended, confirmed she was among those killed in the catastrophic event.

Lee-Scott Academy Family and Friends, With sadness this morning, we share that Taylor Thornton, a 4th grader at…

“Words don’t even come close to imagining the pain they are enduring. Taylor was an amazing example of a child of God. She brought so much joy to all that knew her. She was loved dearly and will forever be missed.”

The coroner said at a news conference on Monday, “I’m not going to be surprised if we don’t come up with some more deceased. Hopefully we won’t.”

72-year-old Earnestine Reese, of Lee County, Alabama, sits among the rubble of her destroyed home with a broken hip and all she has to say is "Thank the Lord.”

The death toll currently stands at 23 and sheriff’s officials fear the number could rise in the wake of the tornadoes that ravaged parts of southeast Alabama.

Sheriff Jay Jones of Lee County told a press conference it was as if someone “took a giant knife and just scraped the ground.”

"Like a bomb went off": At least 23 killed, including 3 children, as tornadoes devastate Alabama town. https://t.co/4FRZtKVV3I pic.twitter.com/D9St0MB510

Jones said that several people were still unaccounted for and that crews were sorting through the debris in hopes of finding survivors.

“I have not seen this level of destruction ever in my time in Lee County,” said Jones, who has been sheriff since 1998.

"Ten seconds in, the tornado comes and everything is gone"

People in Alabama describe the impact of two tornadoes, which have left at least 23 people dead and caused extensive damage

‘My Life Is Gone’

The trail of destruction was at least half a mile wide and overwhelmed rural Lee County’s coroners’ office, forcing it to call in help from the state.

The Sunday tornado, which had winds that appeared to be around 160 mph or greater, was part of a powerful storm system that also slashed its way across parts of Georgia, South Carolina, and Florida.

Beauregard resident David Dean was one of those killed as the powerful winds slammed into his home. His body was found on the other side of an embankment in the neighbor’s yard.

“Our son found him,” wife Carol Dean told The Associated Press. “He was done and gone before we got to him. My life is gone. He was the reason I lived, the reason that I got up.”

Levi Baker, who lives near the hard-hit area in Alabama, took a chain saw to help clear a path for ambulances and other first-responder vehicles. He said he saw bodies of dead people and dead animals.

He said some houses were demolished and trees were uprooted or snapped in half. One house was swept off its foundation and was sitting in the middle of the road.

“It was just destruction,” Baker said. “There were mobile homes gone. Frames on the other side of the road.”

‘It Picked the House Up’

Julie Morrison and her daughter-in-law picked through the remnants of Morrison’s home, looking for keys and a wallet. They managed to salvage the couple’s safe, her husband’s motorcycle boots and her embossed Bible.

Morrison said she and her husband took shelter in the bathtub—her husband jumping in at the last minute—as the twister lifted their house off its foundation and swept it into the woods.

“We knew we were flying because it picked the house up,” Morrison said, figuring that the shower’s fiberglass enclosure helped them survive.

Jones said the twister traveled straight down a county road in the rural community of Beauregard reducing homes to slabs.

Scott Fillmer was at home when the storm hit in Lee County.

“I looked out the window and it was nothing but black, but you could hear that freight train noise,” Fillmer said.

The National Weather Service confirmed late Sunday a tornado with at least an F3 rating caused the destruction in Alabama. Although the statement did not give exact wind estimates, F3 storms typically are gauged at wind speeds of between 158-206 mph.

In a tweet late Sunday, President Donald Trump said: “To the great people of Alabama and surrounding areas: Please be careful and safe. Tornadoes and storms were truly violent and more could be coming. To the families and friends of the victims, and to the injured, God bless you all!”

An EF-5 tornado that struck Joplin, Missouri, in May 2011 killed 158 people. And an outbreak of tornadoes in the Southeast a month before that left an estimated 316 people dead, including at least 250 in Alabama.

For Beauregard, days of mourning lie ahead. The coroner said Monday that he would soon begin releasing bodies to funeral homes.