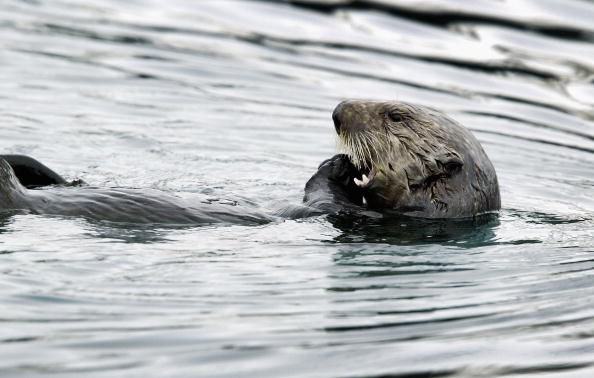 As this year’s Sea Otter Awareness Week kicked off at the end of September, U.S. Geological Survey (USGS) released its 2014 southern sea otter population report. Each year, scientists and advocates hope that the report will indicate significant progress in population growth. It appears, however, that despite significant efforts to recover the species, population growth has stalled. The recently released 2014 USGS southern sea otter population report shows sea otter numbers holding steady in California at 2,944. This is just slightly higher than last year’s count of 2,939 sea otters in California.

One explanation is that the otter’s primary habitat range along the central California coast can’t support any more sea otters. The area may already be supporting the maximum number of otters possible given available food, resources and space. Only so many sea otters can live in the smaller, central coast range before there is serious competition for food, which can place significant pressure on the population’s ability to increase in size. The only solution for sea otters is to expand their range to the north and south, giving them more room to spread out and allowing their numbers to climb. Unfortunately, sea otters don’t seem to be continuing their southern range expansion beyond Point Conception, off Gaviota State Beach. And fewer and fewer otters have been counted each year in the southern portion of the population’s range, from Cayucos to Gaviota.

Why Don’t They Move North?

Researchers are well aware that sea otters along the central coast seem to be having a hard time moving to the north and south. To shed some light on why this may be, we need to look at two major threats to southern sea otters that seem to be increasing: predation from sharks and the spread of disease.

Shark bites are the leading cause of death for southern sea otters. For many years, shark predation on sea otters has significantly prevented the population from expanding past Pigeon Point, the current northern tip of their range. Though sharks don’t typically make a meal out of sea otters, researchers believe they bite the animals when mistaking them for their normal prey like seals and sea lions. Most sea otters bitten by sharks either die from the encounter itself or from infection of their wounds.

Conflicts between sharks and sea otters, however, are just a part of the natural marine ecosystem, and exist for sea otter populations throughout the Pacific Ocean. What is of greater concern is the growing threat posed to southern sea otters by disease and infection, which is now thought to be closely linked to human activity along the California coast.

Disease is a major factor stunting sea otter population growth and range expansion. Each year, up to 40% of sea otter deaths are directly linked to infectious diseases caused by things like parasites, bacteria, and fungi. Many of these diseases are caused or exacerbated by runoff from land-based pollution.

A similar threat is associated with toxic algal blooms in freshwater ecosystems near the coast. Algal blooms are overgrowths of algae that are caused by higher water temperatures and nutrient concentrations—conditions that are often a result of agricultural runoff of elements like nitrogen and phosphorus. Summer droughts (certainly an ongoing problem for California) and increased salinity also contribute to algal blooms.

Some algal blooms are particularly dangerous because they can produce toxins, like microcystin, for example, that are harmful to humans and wildlife. Recently, scientists have discovered that the toxins produced by blooms in California’s coastal freshwater ecosystems can travel long distances, ending up in our coastal marine ecosystems such as Monterey Bay. The microcystin toxin has been found in fish, mussels, crustaceans and other invertebrates throughout many of California’s coastal marine ecosystems. Unfortunately, sea otters consume many of these species and, as a result, suffer from microcystin poisoning. Microcystin causes significant liver disease in sea otters, offering them very little chance of survival, especially when coupled with other threats. Researchers believe that the majority of sea otter deaths associated with this toxin have occurred since 2005, meaning there have been more and more toxins from freshwater algal blooms reaching the shore. This may be due in part to climate change impacting water conditions.

Natural resource managers and climate change researchers are still trying to understand just how climate change will impact California’s ecosystems. Still, projections show increasing changes to coastal habitats such as sea level rise, higher water temperatures, and increased ocean acidity. These will undoubtedly impact sea otters and their habitats along the California coast. For example, ocean acidification can reduce some marine species’ ability to produce and maintain shells. Without a strong, natural protection, these species may no longer be able to survive and reproduce. This is a big issue for sea otters, which eat large amounts of shelled creatures such as mussels and clams.

The 2014 southern sea otter population report has solidified a sense of urgency among southern sea otter advocates and researchers to better understand just how these threats impact their population and what we can do to better support their recovery. And as a keystone species, sea otter health can give us essential information about the condition of California’s coastal ecosystems and other marine organisms, which is becoming increasingly important in the face of climate change.

There is plenty we can do to help restore the southern sea otter population. We must work together to improve the water quality and overall health of California’s coastal watersheds across the state. Not only will this boost the health of sea otters where they currently live, but it will also improve the health of habitats to the north and south, giving sea otters a chance to expand their range. The state of California is already taking steps to increase monitoring and reporting of water quality throughout the state, and even established the California Water Quality Monitoring Council in 2007. With this information, we are now able to determine what areas need help.

Californians in coastal communities can help by encouraging their local water boards to require greater standards for watershed health and reduce polluted runoff into marine environments. Reducing pollution from land-based runoff, such as nutrients used in agriculture, will help prevent toxins and bacteria from reaching coastal habitats and the wildlife that call them home.Californians can also support much needed sea otter research by contributing to the California Sea Otter Fund through their state income taxes.

Our actions to reduce direct threats from humans will help make southern sea otters and their coastal habitats healthier, and help them better confront other threats. Acting now is the best chance we have at saving this critical species and the ecosystems on which they depend.

Haley Stewart is the California Program Associate at Defenders of Wildlife for defendersblog.org. For the original article and more information, please click HERE.