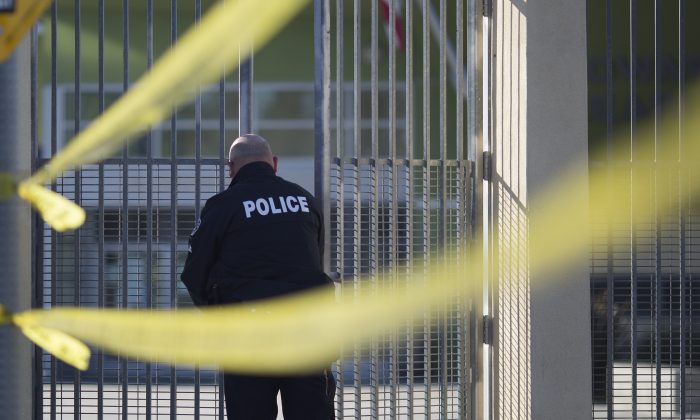 Police converge on Edward R. Roybal Learning Center as all Los Angeles city school are shut down after receiving a threat on December 15, 2015 in Los Angeles, California. (David McNew/Getty Images)
US

Schools in Several States Threatened on Heels of LA Closure

MIAMI—School districts from Florida to California reported receiving threats Thursday, Dec. 17, similar to those that closed Los Angeles’s massive school system earlier this week, though in most cases students attended class without interruption.

Tuesday’s district-wide closure in Los Angeles was sparked by an email threatening a large-scale attack. New York City schools received a similar threat, but officials there concluded it was a hoax.

The closure of a large U.S. district because of threats is rare, and the move in Los Angeles—with the nation’s second-largest school system—reflected the lingering unease in Southern California after the attack that killed 14 people at a holiday luncheon two weeks ago in San Bernardino.

Some of the districts affected by the latest threats are among the nation’s largest—Miami ranks 4th, Fort Lauderdale’s Broward County system is 6th, Houston 7th, Orlando 10th, and Dallas 14th.

Districts in Dallas and Houston and another near the Mexican border reported receiving threats, though none has been deemed credible.

We need to make sure that we don’t overreact to fear.
— David Brown, chief, Dallas Police

Officials with the Dallas Independent School District said some teachers and staff members at two schools—Pinkston High and Martinez Elementary—received emailed threats and notified district officials. The district’s police department activated its emergency response protocol and began working with other law enforcement agencies to make sure the schools were safe, though no credible threat was found.

“We need to make sure that we don’t overreact to fear,” police Chief David Brown said.

Robert Mock, police chief for the Houston Independent School District, said random overnight searches by explosives-detecting dogs and patrol officers turned up nothing after district officials, including the superintendent, received the threat by email.

He said he didn’t want to downplay the message because “a threat is a threat.” But he said the message referred to weapons and explosives among unsophisticated content that was “so far over the top, the logistics just didn’t pan out.”

In South Texas, the McAllen Independent School District said in an email to parents that it appears district officials received the same threatening email that targeted the Los Angeles and New York districts. The statement said the South Texas district “was able to trace the email to the same server that was used” in those hoaxes. The Texas district did not elaborate.

The McAllen district has about 25,000 students and 33 campuses.

School officials in Miami and Fort Lauderdale haven’t released details about the threats but said on their websites that they were similar to those received in New York and Los Angeles.

In Orlando, Orange County Superintendent Barbara Jenkins said the threatening email was sent to the district’s general email late Wednesday, and principals have been asked to stay alert and keep students calm.

Officials say the district received an email threat similar to the ones in other cities. Schools opened for the district’s 79,000 students on Thursday. Long Beach is adjacent to Los Angeles.

In Plainfield, west of Indianapolis, students were told to stay home after a threat was “directed to the high school.”

In Danville, the Danville Community School Corp. said two students—a 14-year-old freshman and a 17-year-old senior—were arrested. They’re accused of making threats against schools in separate incidents. Officials describe the first as a verbal threat that a classmate overheard and the second as a comment the senior posted on Facebook.

Danville Police Chief William Wright said a third threat was posted on social media early Thursday, and it was apparently tied to the threat against Plainfield schools.

Wright said officials are investigating and taking the threats seriously.

The Franklin Community Schools south of Indianapolis issued a statement saying it canceled Friday classes after receiving a “serious” threat and consulting with police. It says the validity of the threat received Thursday afternoon remained in question.

The statement did not disclose the nature of the threat, but Superintendent David Clendening told the Johnson County Daily Journal that police dogs were searching the Franklin Community High School after a caller reported a homemade bomb in a locker room area. The school also tweeted that it was on lockdown.

Officials with the San Francisco Unified School District said Thursday that officials determined a threat there was not credible. Schools were open Thursday.

Authorities say they inspected all schools and found nothing suspicious. Police presence is increased at schools around the district, which has 57,000 students.

A Clark County School District spokeswoman says administrators discovered an emailed threat after 9 a.m. Thursday similar to those received this week in Los Angeles, New York, Houston, and other cities.

She says officials deemed the threat “less than credible.”

The district sent a letter to parents saying principals and school staff had been asked to stay alert and keep students calm and focused on learning.

It says it has crisis plans in place and police trained to detect and respond to threats.