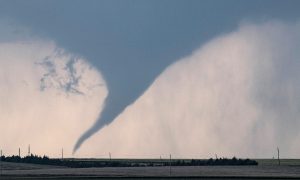 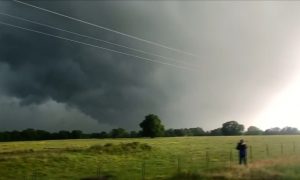 Severe Storms Will Impact New York Today, as a Nor'easter Develops Off the New England Coast
0 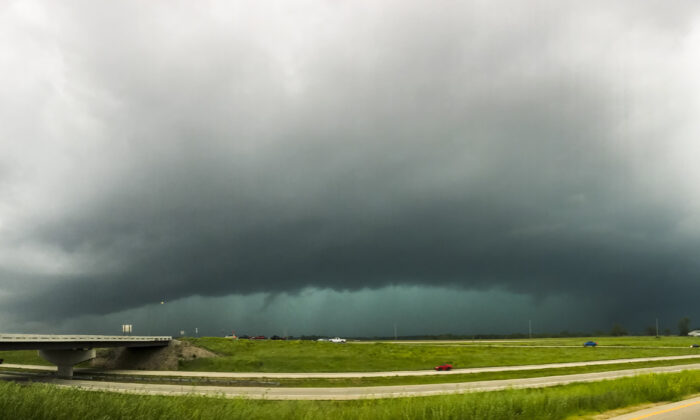 Rain obscures the view of a tornado on May 28, 2019 in Lawrence, Kan. (Photo by Kyle Rivas/Getty Images)
US

It sounds like something out of a thriller script: As the country fights to contain a deadly CCP virus, a hurricane rakes the East Coast, knocking out power, disrupting already tenuous supply chains, displacing residents, and further threatening millions of lives.

But as the country fights against CCP (Chinese Communist Party) virus, commonly known as the novel coronavirus, a host of natural disasters could become a frightening reality—one that officials and experts say we need to be prepared for.

Even in normal times, natural disasters require a small army of government staff, first responders, relief organizations, and volunteers to move people out of harm’s way and provide victims with basic necessities like shelter, food, and medicine.

With emergency response teams and local budgets already spread thin because of the CCP virus, government officials and disaster experts expressed concern to CNN about the challenges the pandemic could pose for our ability to provide relief.

The Federal Emergency Management Agency (FEMA) has already been tasked with leading the government’s sprawling response to the virus and helping to fill the needs of hospitals fighting to secure vital medical supplies in a chaotic global marketplace.

The agency is still prepared to provide relief if disaster strikes, with only about 3,000 of its 20,550 employees now supporting the CCP virus response, according to a FEMA advisory.

But staffing shortages are a concern, a FEMA official who spoke with CNN on condition of anonymity said.

“It’s terrifying to think about what would happen if disaster were to strike,” that official said.

Based on scientific projections, it’s likely the United States will face natural disasters while the virus is spreading.

Hurricane season begins on June 1, and forecasters predict an above-average season, with a roughly 70 percent chance that a major hurricane will make landfall in the US, according to scientists at Colorado State University.

The Midwest and Great Plains, already devastated by record floods last year, are on high alert after the National Oceanic and Atmospheric Administration (NOAA) forecast major to moderate flooding this spring in 23 states from the northern Plains to the Gulf Coast.

And as fire season looms out West, the National Interagency Fire Center (pdf) has predicted “above normal” fire activity in Central and Northern California and Oregon.

Past disasters have threatened to overwhelm the national response system, but we have never faced a situation quite like this one.

“In 2017, when you had Harvey, Irma and Maria, that stretched FEMA pretty thin, and some would say past the breaking point,” said Bryan Koon, the former director of Florida’s Division of Emergency Management. “But right now, you have a disaster going on in every state, every territory, every county, and every city.”

From how people evacuate to how they are sheltered in the wake of a weather catastrophe, the pandemic is forcing us to rethink how we prepare and provide relief.

And in some towns, there is fear that the combination of extreme weather and the virus will be more than they can bear.

Safely evacuating and sheltering millions of people without furthering the spread of a deadly virus is a challenge emergency planners and experts say we need to plan for now.

When tornadoes spun up across the South last weekend, government officials and weather experts told residents to prioritize storm safety over concerns of spreading the virus and to go to local community shelters if they had no other option.

Hurricanes, however, are different beasts.

Most people can shelter in their homes during severe storms. But in a hurricane, mass evacuations are often the only option to protect people from deadly storm surge, winds, and flooding.

Emergency managers are most focused on helping those who can’t help themselves get to safety, like the elderly and people living in poverty, Koon said.

With the economic toll that coronavirus is taking, there could be even more people in the latter group, unable to afford gas money or a hotel room to get out of harm’s way, he said.

Shelter Storms and a Killer Virus

Then, there is the issue of sheltering displaced people if social distancing measures are still in place.

“How can you shelter 300,000 people when you can’t pack them all into gymnasiums like you have in the past?” he asked.

A FEMA spokesperson acknowledged the difficulties of providing shelter and maintaining social distance, telling CNN in a statement, “We are working with our partners on new guidance on non-congregate sheltering to be able to support state and local efforts as they address these issues.”

Discussions are ongoing about how FEMA will respond to natural disasters and adjust sheltering procedures, said a second FEMA source who spoke with CNN on condition of anonymity.

“The focus right now is we need to get more PPE (personal protective equipment) to avoid spreads in the shelters. We haven’t written (social distancing) off, but it’s going to be near impossible at tornado and hurricane shelters,” that source said.

Organizations like the Red Cross, which runs hundreds of shelters and works closely with FEMA and the states, are also changing their protocols.

To deal with the threat of the virus at Red Cross shelters, there will be temperature and symptom screenings at all entrances, and people showing signs of illness will be isolated in separate shelters, Riggen said.

Once inside shelters, cots will be spaced further apart than usual and hand sanitizing stations placed throughout, meals will be taken to families instead of self-service, and there will be screenings twice a day for symptoms, Riggen said.

Volunteers are Critical but May Not Be an Option

Still, experts say that you can do all the planning you want, but disaster relief is ultimately dependent on people, including lots of volunteers.

More than 90 percent of the Red Cross’ workforce is volunteer, and the organization is conducting weekly surveys to gauge their willingness and availability, as well as making as many roles as possible virtual, Riggen said.

The availability and safety of volunteers during the pandemic is a top concern in small towns and cities that dot the Mississippi and Missouri rivers.

On the heels of last year’s record inundation, they’re bracing right now for the possibility of more flooding.

Jo Anne Smiley is the mayor of Clarksville, Missouri, one of those vulnerable cities on the Mississippi River. It has around 500 residents, and its main drag is just feet from the river.

“It’s beautiful to see, and it’s great for travelers when they come here,” Smiley said of the waterway. “But when the water comes, it’s not great because it has to be defended.”

With a permanent flood barrier out of financial reach, Clarksville officials usually work with FEMA, state and local emergency response teams and volunteers from across the country to defend against floods by building an 8-foot rock wall topped with sandbags.

But bringing to town the number of people it would take to build a wall like that isn’t possible because of the virus. Even if they came, building a wall while keeping people 6 feet apart so virus, if it’s present, doesn’t spread, is not realistic, Smiley said.

Instead, Clarksville is left to hope for the best.

“If (the floods) come moderately, we might do OK,” the mayor said. “If it comes with a vengeance, then I can’t even speculate in my mind what’s going to happen. I don’t want to.”

Meanwhile, many river towns are also vying with bigger cities for coveted personal protective equipment. Colin Wellenkamp is the executive director of the Mississippi River Cities and Towns Initiative, which works with towns in the region on a host of issues, including flood resilience.

If volunteers were willing to help fight rising rivers, the availability of protective equipment might be the linchpin to making the trip—and making sure the virus risk doesn’t spike in flood-prone communities, he said.

“Are they going to show up if there isn’t enough PPE for everybody? We can’t really depend on folks to bring their own,” Wellenkamp said.

But many towns he works with are still waiting on FEMA reimbursements from last year’s floods and are strapped for cash, so some must rely on PPE donations, he said.

Craig Fugate, who was FEMA director from 2009 to 2017 and oversaw the response to large disasters like Superstorm Sandy, said local officials should explore options other than bringing people in from the outside to provide relief.

With mass job losses because of the virus, the federal government and states should look into paying residents in affected areas to help with the response, if possible, he said.

“Moving a lot of volunteers may not be a smart idea, so I think communities need to look to their current furloughed employees as their emergency workforce,” Fugate said. “There’s a whole lot of people that just lost their jobs, and you can put them to work.”