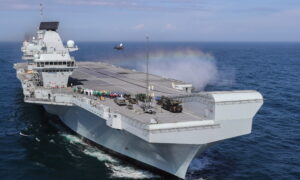 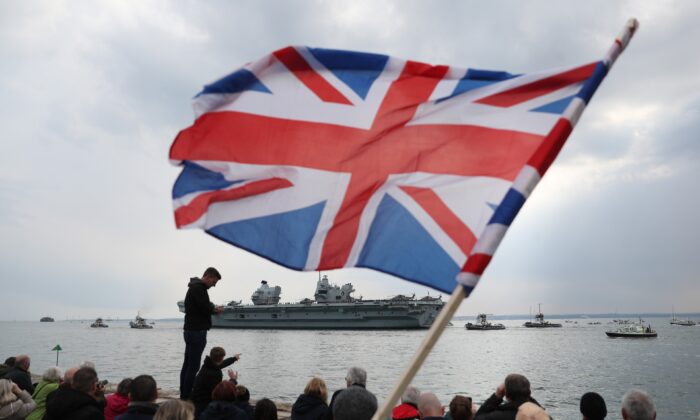 The Royal Navy aircraft carrier HMS Queen Elizabeth leaves Portsmouth Naval Base in Hampshire for exercises off Scotland before heading to the Indo-Pacific region, on May 1, 2021. (PA)
UK

Thousands Wave Off UK Aircraft Carrier Ahead of Indo-Pacific Deployment

Thousands of well-wishers have packed the harbour walls to wave off the Royal Navy’s flagship HMS Queen Elizabeth as it set sail for exercises and its first operational deployment to the Far East.

The £3 billion ($4 billion) aircraft carrier sailed out of Portsmouth Harbour to cheers from the crowds who filled the walls and the beaches.

Well-wishers waved Union Flags and held banners saying farewell to their loved ones who will be at sea for about seven months.

A flotilla of small boats also lined up to view the huge carrier as it sailed off into the Solent.

The crew of the 65,000 tonne warship lined the flight deck while a piper played at the top of the “ski-ramp” at the front of the ship.

The CSG will take part in Exercise Strike Warrior off Scotland before heading to the Indo-Pacific region.

The exercises, which mirror a broad range of crisis and conflict situations, will include 1,500 ground troops at military ranges across the country and maritime exercise areas off the west and north coasts.

HMS Queen Elizabeth and the CSG will deploy shortly after the completion of Strike Warrior.

The carrier, with eight RAF and 10 U.S. Marine Corps F35B stealth fighter jets on board, will depart for Asia accompanied by six Royal Navy ships, a submarine, 14 naval helicopters, and a company of Royal Marines.

The CSG, which will carry out visits to India, Japan, South Korea, and Singapore, will include the U.S. destroyer USS The Sullivans and the Dutch frigate HNLMS Evertsen.

A total 3,700 sailors, aviators and marines are involved in the deployment which will cover 25,000 nautical miles.

Commodore Stephen Moorhouse told the PA news agency: “This is an amazing capability and pulling that all together with our international partners is a real statement that the Royal Navy is very much in the Premier League.

“The deployment takes us through the Mediterranean, the Middle East then operating with key partners in the Indo-Pacific just shows the Royal Navy has an ambition to be active on the global stage and operate wherever our politicians may feel fit.”

Colonel Simon Doran, the senior U.S. representative in the CSG, said the deployment had been in planning for more than 10 years.

“It sends a message to potential adversaries but also to our allies to reinforce should they ever be needed, we will be there, we generally always fight together so to deploy together really helps strengthen our relationship,” he said.