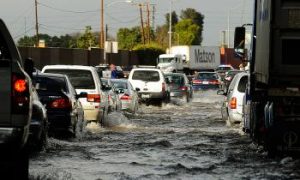 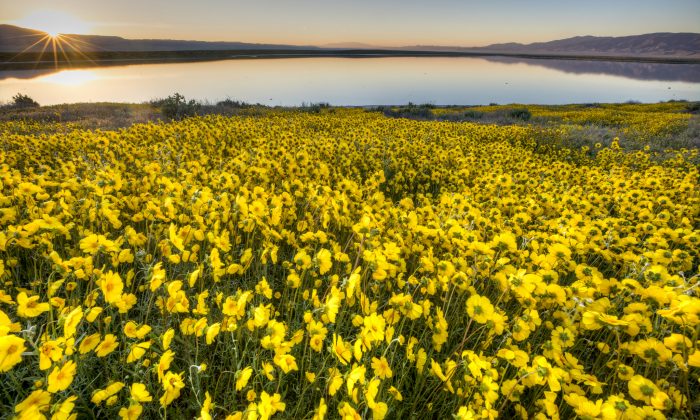 Thousands of visitors are making their way to the hills of Lake Elsinore to catch a glimpse of the rare California super bloom, as the Southern region sees its second bloom of wildflowers in two years.

Steady rain showers since December have transformed the once drought-stricken canyons into a burst of deep orange and purple wildflowers, attracting swarms of people, keen to photograph its beauty.

A super bloom is a phenomenon, which only occurs after a perfect mix of heavy rainfall and appropriate temperatures, and the burst of wildflowers usually only graces California once a decade, according to Conde Nast Traveler.

The #superbloom is causing a super traffic jam on 15 freeway as visitors want a close-up look of the orange poppies filling the hillsides in Walker Canyon in #lakeelsinore #wildflowers pic.twitter.com/IckZHjyxKd

Hiker Anjelica Sloan from Seattle was at Anza-Borrego Desert State Park with her partner Megan, who hadn’t seen a super bloom since she was a young child.

“The contrast between the mountains and the shadows and the flowers is just remarkable,” she told the New York Times.

Southern California’s last super bloom was in 2017 following years of drought, and naturally, the explosion of wildflowers has attracted nature lovers.

But Solis is concerned the wildflowers are being damaged in exchange for the ‘perfect’ photograph.

Many of the vivid orange flowers are being trampled on, plucked as souvenirs, and photographers are balancing their camera tripods on the flower beds, Los Angeles Times reported.

“Look at those people. They’re stepping all over the poppies. The people are nice—except when they’re fighting about poppies,” Solis continued.

Visitors are scowling among themselves to be wary of stepping on the delicate flowers, which have attracted so many nature lovers, that additional parking lots have opened around Walker Canyon to ease traffic.

Around 1,000 visitors have been making their way to Walker Canyon daily to catch a glimpse of the spectacular super bloom, according to Kim Cousins, president of the Lake Elsinore Chamber of Commerce.

But unlike 2017’s super bloom, winter rainfall has been more scattered this year, meaning the wildflowers are likely to stay until April and they aren’t blooming in a single area at the same time, Anza-Borrego Desert State Park’s official Dennis Stephen told Los Angeles Times.

“Prior to 2017, there wasn’t the social media experience. We were not quite as prepared. We just want everyone to enjoy the flowers. To do so with large crowds always requires a lot of patience,” he said.

The blossoming hills of California have also attracted another type of visitor—the orange and black painted lady butterflies from Mexico, who have arrived to feast and lay eggs on the wildflowers, reported CNN.

“This is the biggest outbreak since 2005,” said Art Shapiro, a University of California-Davis professor and expert on the migration of butterflies.