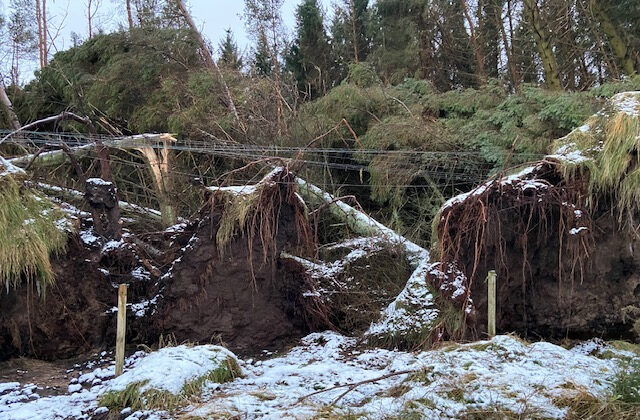 Thousands Still Without Power as Snow Falls in Parts of UK

Thousands of people are still without power following “extensive and catastrophic damage” caused by Storm Arwen, as snow appeared overnight in some parts of the UK.

Downing Street said that around 19,500 homes are still without power due to the damage caused by Storm Arwen.

The prime minister’s official spokesman said a further 7,949 homes have had power restored since Wednesday—meaning 98 percent of the 950,000 homes originally affected now have electricity.

Scottish and Southern Electricity Networks (SSEN), which distributes power to 3.7 million homes in central southern England and the north of Scotland, said 3,100 people are still off supply, mainly more rural communities, and it was working to reconnect them.

Areas that are most affected include Aberdeen, Aberdeenshire, Moray, Angus, Perthshire, and Stirlingshire.

It added that areas with high voltage power, which supplies towns and villages, are now largely reconnected, and SSEN said it hopes to restore power to the rest by the end of the day.

For low voltage areas, including individual homes and groups of properties, the company said that “extensive damage” has taken place, and it’s hoping to restore power to homes by Friday.

Aberdeenshire Council said in a statement that 120 military personnel are en route to “support ongoing resilience efforts” following the storm.

It comes as rain, sleet, and snow fell in southwestern parts of the UK on Thursday, while wintry showers have affected the North and East.

The Met Office said the showers will be confined to Norfolk later on Thursday, with gales easing along the North Sea coast.

More snow is expected to hit Scotland on Friday before moving across towards the South East. Meanwhile, rain is predicted for the northwestern parts.

Across England, there may be highs of 3 C (37.4 F) and 4 C on Thursday, with some sunny spells and clouds later.

Clare Pennington, from Newtyle in Angus, said she was on her sixth day without power and is staying elsewhere as she is building a house.

“I’m pretty resilient, but the frustration of having no news and no idea of when things might improve is really hard, and physically it’s tiring with no sleep since Thursday [Nov. 25] because of the cold,” the sustainability project manager told the PA news agency.

Pennington later said she had been contacted by engineers who were en route to visit her property.

By noon on Thursday, SSEN had connected power to 125,000 customers.

People who are without power and are unable to stay with family or friends can get their costs reimbursed from SSEN for other accommodation.

Receipts must be kept. Anyone who needs help arranging accommodation should call SSEN’s contact centre on 105.

The firm has also established welfare facilities, with free hot food and drinks. Customers can also claim up to £15 ($20) per person for food from local places.

The Energy Networks Association said as of 9 a.m. on Thursday that 19,500 people were still without power and that 98 percent of homes had been reconnected.

It’s aiming to reconnect the majority of properties by Friday, while people who live in more rural areas may have their power returned by the end of the week.

The association said that more than one million homes had been affected by the power issues.

Traffic Scotland said it was busy and slow around Edinburgh due to a lane closure on the A720 Eastbound between Calder and Baberton.

An earlier crash at Calder led to long delays on the M8, M90, and M9 as well as other routes, but later cleared.