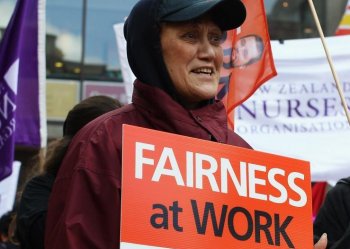 Workers gather to protest for their rights in Auckland on August 21, 2010. On August 16, 2010 the National Government introduced two new Bills to Parliament to change employment law in New Zealand. (Hannah Johnston/Getty Images)
US

Thousands Rally for Fairness at Work

Organised by the Council of Trade Unions (CTU), the rallies intend to highlight what the unions deem to be unjust attacks on the working conditions and job security of all New Zealanders.

CTU President, Helen Kelly, calls the rallies a “positive call for Fairness at Work,” adding, “The Government is relentlessly negative and disrespectful in its treatment of New Zealand workers, stripping away their rights and making them easier to fire unfairly."

At the heart of the matter is the Government's move to extend the current 90-day probation from businesses with 19 or fewer employees, to all businesses.

During this initial probation period, an employee can be fired without the right to claim unfair dismissal.

The Government says the bill has already benefited hundreds of unemployed people who wouldn't have been hired without it.