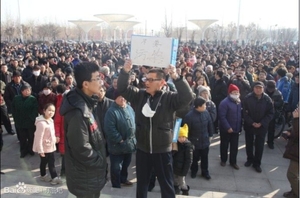 Thousands of residents in Xianhe Town, Dongying City, Shandong Province, gathered in front of the town hall to protest the toxic gas leak from a local chemical plant on Feb. 23. (Photo from the Internet)
China

Thousands of angry residents gathered in front of the town hall in Dongying City, Shandong Province, on Feb. 23 to protest the lack of response from a chemical company and the local government to a toxic gas leak that has affected up to 30,000 people.

Waving signs saying “No Toxic Gas” and “No Pollution”, and shouting “Give me back my blue sky,” the residents demanded that authorities take responsibility for a hydrogen sulfide leak from a petrochemical plant on Feb. 17.

Though residents barricaded themselves in their homes, thousands were poisoned by the fumes to varying degrees. The local hospital treated people for symptoms of hydrogen sulfide poisoning, such as a dry cough, vomiting, watering eyes, and dizziness, while the hospital staff also struggled with the effects of the toxic gas.

Protesters were angry at many victims being left untreated, despite the government’s apology. Demonstrators complained that none of the victims received any compensation, even though the petrochemical company was fined. They believe the government deliberately played down the seriousness of the incident and damage, which also contaminated dozens of kilometers of wetlands.

The local environmental protection agency admitted that the plant had been shut down due to a previous gas leak, but had resumed operation without proper inspections and permits. Local authorities also claimed that most of the leaked gases were harmless hydride and only a very small portion was the toxic sulfide, according to a local Shandong newspaper.

The doctor who treated the victims at the local hospital emergency room explained that hydrogen sulfide can cause great damage to the central nervous system, reported the Jinan Times. The symptoms can be subtle, but the damage is permanent and incurable, he said, recommending a course of detoxification that included anti-inflammatory drugs, vitamins, and plenty of water.

Addressing industrial pollution issues in China, Dr. Jason Z. Yin, a professor at Seton Hall University’s Stillman School of Business in New Jersey, told Radio Free Asia that China will have to pay a huge price for its one-sided emphasis on the speed of economic growth at the expense of the environment.

He indicated that effective environmental protection is complex, and imposing fines on polluting chemical plants may not fundamentally solve the problem.

Research and translation by Jenny Li.