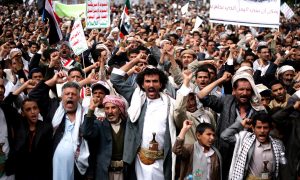 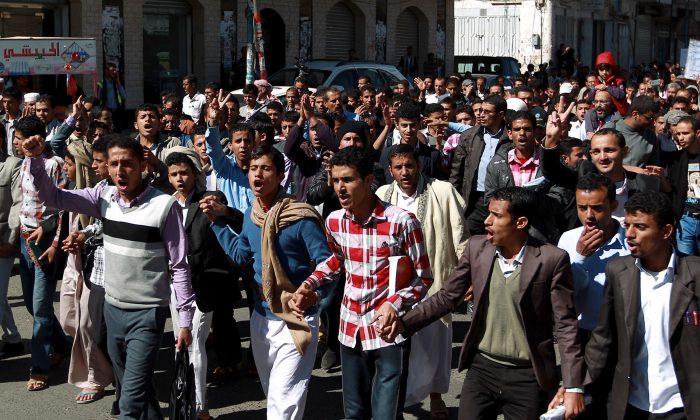 Yemeni protesters shout slogans during a rally in Sanaa on Dec. 27, 2014, against the deployment of armed militias from the Shiite Houthi movement across the country and in the capital. (Mohammed Huwais/AFP/Getty Images)
Middle East

SANAA, Yemen—Thousands of people have demonstrated in Yemen’s capital to demand both the ouster of Shiite Houthi rebels who control the city as well as the country’s beleaguered president.

The demonstrations Saturday were the first of their kind demanding President Abed Rabbo Mansour Hadi step down since he took over the presidency after a popular revolt toppled his predecessor, Ali Abdullah Saleh, in 2011.

Many in the streets chanted slogans accusing Hadi of mismanaging the country to the point where state institutions collapsed and militants could take over. They have named their protest the “rejection” movement.

The demonstrators, from a variety of political groups, also denounced last week’s attack on a police academy in Sanaa that killed 37 people, calling for a swift investigation and trial of the culprits.