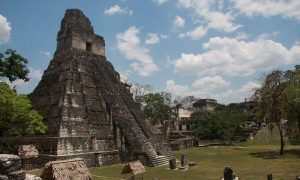 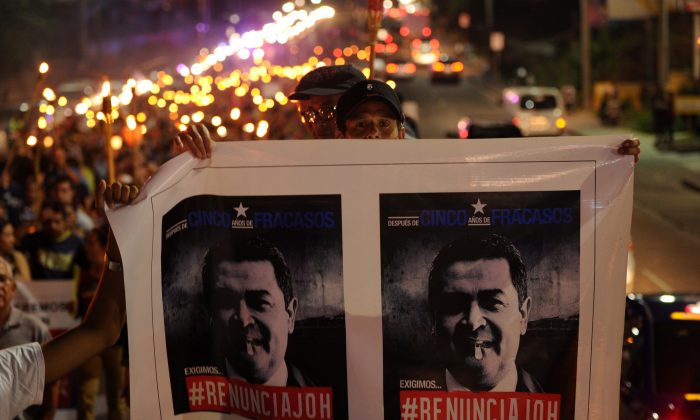 People take part in a protest demanding the resignation of Honduran President Juan Orlando Hernandez in Tegucigalpa on May 29, 2015. Members of the opposition have accused leaders of the governing Nacional Party of corruption and misappropriating funds. (Orlando Sierra/AFP/Getty Images)
Americas

MEXICO CITY—A protest movement organized over social media in Honduras has led to large demonstrations in cities around the Central American country.

The protesters are upset over a scandal involving a purported multimillion-dollar embezzlement of Social Security funds, with some of the money allegedly going to finance the governing political party. Among other things, they are calling for President Juan Orlando Hernandez to resign.

“The Social Security case is the occasion that has fed up the Honduran people, and that funds from Social Security would be used to finance political campaigns has been the catalyst for this movement,” activist Gabriela Blen said Monday.

Organized via Twitter with hashtags including one that translates as “resign JOH” — a reference to the president’s initials — the movement began recently as just a couple dozen people at a torchlight vigil in the capital.

The scheme allegedly relied on mark-ups topping 100 percent on goods and services such as medicines and pensions.

It gradually picked up steam, and thousands marched through Tegucigalpa on Friday with similarly large protests in San Pedro Sula, Siguatepeque, Choluteca and Comayagua during the weekend.

The Honduran Public Ministry has said a network led by the then-director of the Social Security Institute, Mario Zelaya, fraudulently misspent at least $120 million during the 2010-14 presidency of Porfirio Lobo.

The scheme allegedly relied on mark-ups topping 100 percent on goods and services such as medicines and pensions, with kickbacks then being paid by businesses that benefited. At least part of the money purportedly ended up in the hands of the National Party, which counts both Lobo and Hernandez as members.

National Party lawmaker Oscar Alvarez said that if money was received from businesses tied to Social Security, “it was done in good faith.”

Hernandez has said that the party “maintains its accounting on the basis of checks contributed by each member” and that those individuals are responsible for the money, not the party as a whole.

Zelaya was detained after fleeing the country. He is not related to former President Manuel Zelaya, who was seized by the Honduran military and ousted in a 2009 coup.

The 18-person Social Security board of directors, all of them appointed by Lobo, is under investigation. Two former vice ministers of the health and labor departments have also been detained.

Blen said organizers plan another march Friday to local offices of the United Nations. They will demand the creation of an international commission to investigate crime and impunity similar to a U.N. commission currently operating in neighboring Guatemala that has played a key role in uncovering graft scandals involving that country’s customs and Social Security agencies.

She said there is no direct link between the Honduras protests and similar demonstrations seen in Guatemala, but added: “Yes, of course, (they were) an inspiration.”