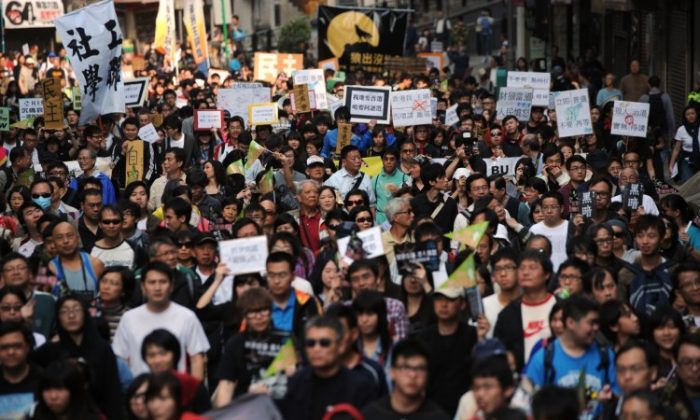 Some college students made a tombstone symbolizing the death of democracy in Hong Kong. (Pan Jingqiao/The Epoch Times)
China

HONG KONG—On March 25 a small number of designated electors chose a new chief executive for the special administrative region of Hong Kong, and on April 1 a mass protest was held demanding his resignation. The protesters say they do not want to be ruled by a Chinese Communist Party member, and they do want the CCP to stop interfering with Hong Kong elections and stop subverting the principle of “one country two systems.”

The organizer of the protest, Civil Human Rights Front (CHRF) of Hong Kong, estimated that about 15,000 people took part. A heavy police presence was seen throughout the protest, particularly when the protesters arrived at the liaison office where the parade ended. It was estimated that the police-to-protester ratio was one to one.

The protest was led by a group of young people wearing red hats and carrying a giant banner, a replica of a wolf skin, which read, “A Wolf is in Power, Hong Kong Residents Are Enraged.” New Chief Executive Leung Chun-ying has been called a wolf by local media and residents for being an underground member of the CCP.

Leung Chun-ying’s campaign office quickly denied the claim. In the “small circle election” only 1,200 Hong Kongers, out of a total population of 7 million, have the right to vote for the chief executive. Critics claim the designated electors are strongly pro-Beijing. Leung Chun-ying was elected on March 25 with 689 votes.

For the parade, protesting college students made a tombstone symbolizing the death of democracy in Hong Kong. Some residents held banners with digitally combined pictures of Leung Chun-ying and Mao Zedong, with text that read, “Protest against Hong Kong rule by an underground member of the CCP.”

The protest included opposition political figures. Council members from different parties walked together, side-by-side, chanting: “We are calling the shots in Hong Kong. Chinese Liaison Office, get out of Hong Kong.” The Chinese Liason Office, similar to an embassy, represents the People’s Republic of China in Hong Kong.

When protesters arrived at the south gate of the Chinese Liaison Office, they left the giant wolf skin replica on the ground for people to step on. Several hundred protesters then went to the front gate of the Liaison Office and clashed with the police, who used pepper spray to disperse the crowd.

At around 11 a.m. on March 29, after Leung was elected, the Chinese regime’s mouthpiece People’s Daily called Leung a “comrade” in the “personnel” section of the website. Leung has vehemently denied that he is a member of the CCP. However, the two former chief executives, Tung Chee-hwa and Donald Tsang Yam-kuen were never referred to as a “comrade” by the CCP.

“There is no way we can accept the election, which was completely under the control of the Chinese Liaison Office,” Professor Joseph Cheng at City University of Hong Kong said. He called for Hong Kong residents to “take advantage of every opportunity to stand up against such anti-democratic, anti-Hong Kong policy.”

Hong Kong lawmaker Leung Kwok-hung, a founding member of the League of Social Democrats and a democratic political activist, said, “We must recognize that communist China is a dictatorship without human conscience. Even if we want to resist, there is very little room left for us.”

Leung Kwok-hung, however, has urged the Hong Kong people not to be scared by communism.

“We should pressure the covert Party members to publicly declare their identities,” he said. “When citizens’ voices and demands become stronger, they must respond; when citizens appear tired and are afraid to speak up, it gives them the chance to grow stronger.”

He said that the covert Party members currently in Hong Kong do not dare declare their true identities as long as there was open competition. He used Leung Chun-ying as an example.

“Because if he does [reveal his identity], who will be responsible for his mistakes during his reign if he is elected? Doesn’t that mean the Communist Party must go and leave office?”

Hong Kong Democratic Party Chairman Albert Ho Chun-yan noted that in a mock popular vote carried out by Hong Kong University, 82 percent of the vote was against Leung Chun-ying.