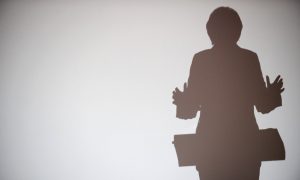 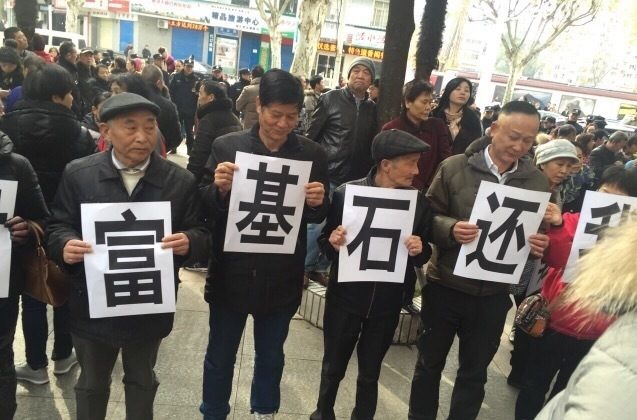 Thousands of investors gather outside government offices and stores in the central Chinese city of Wuhan to demand that Wuhan Wealth Cornerstone Investment Management issue pay outs after it defaulted on Nov. 24 from Nov. 25, 2015. (Screen shot/Sina Weibo)
China

Mr. Sun never imagined he would end up protesting outside local government offices in Wuhan, the capital city of Hubei Province, after he put his money in the largest financial management company in central China. But after the firm, Wuhan Wealth Cornerstone Investment Management (Wuhan Caifu Jishi), announced a default on Nov. 24, thousands took to the streets in protest.

The firm was defaulting on a “wealth management product” (WMP), a high-yield financial instrument, after a project the capital was invested in ran short of funds. The product had collected about 5 billion yuan ($782 million) from over 70,000 investors, according to one of the investors speaking to China Business Journal.

WMPs, as they’re called, are attractive because they offer returns markedly higher than the 3 percent maximum rates that state banks give for deposits. Certain products offer annual interest rates of 5 percent, or even promise short-term returns of over 10 percent.

My son is getting married soon, what should I do?
— Chinese investor

Protesters in the current incident are mainly Wuhan-based retirees who had invested their life savings into the company’s product. Some received a small stream of payments, while more recent participants saw no returns, according to accounts by investors. The day after the default, they stormed out in the bitter Wuhan cold with banners and placards to petition Wealth Cornerstone and the local authorities to resolve the issue. Cries of “return our money!” rang out. About 1,000 armed police were mobilized to suppress the protesters, and eight petitioner representatives have since been arrested, according to accounts by participants.

The protest in Wuhan highlights the dangers of investing in wealth management products in China, and shows the dubious link between local Communist Party officials and finance companies. The protest also hints at potential social unrest, always bubbling beneath the surface, that could be set off by continued corporate defaults as China’s economy slows down.

Mr. Sun, who describes himself as prudent, was convinced by a friend who worked at the company that the product, which offered 8.8 percent annual interest, was a risk-free investment.

He invested 600,000 yuan ($94,000) three months ago, he said in an interview with the Epoch Times, and has yet to receive a payment. An earlier investor put in the 250,000 yuan he had set aside for his son’s wedding, but stopped receiving payments on Nov. 20, according to China Business Journal, a state-funded publication.

“My son is getting married soon, what should I do?” the investor said.

WMPs sound too good to be true precisely because they are, according to Xiao Gang, the chairman of the Chinese regime’s securities regulatory commission.

In an October 2012 op-ed published in the state-run China Daily, Xiao explained that banks and investment companies rely on “some empty real estate property or long-term infrastructure,” or even high-risk projects to generate cash flows for their WMP investors. If those projects face liquidity problems, banks and companies then sell more WMPs to pay their long-time investors first. Xiao Gang called the process “fundamentally a Ponzi scheme.”

WMPs are part of China’s shadow banking system, which is unregulated, often riskier, and more opaque than traditional banking.

Founded in 2012, Wuhan Wealth Cornerstone is linked to Wuhan Huashi International Group, which was established in 1993 and has assets in the tens of billions of yuan and employs nearly 1,000.

One investor, who declined to be named for fear of repercussions, claimed in a telephone interview with the Epoch Times that Wuhan Wealth Cornerstone’s default is the result of a shady deal between a government official and the boss of a private company.

The investor believes that Huashi’s executive owes money to organized crime in China, and has now come under Party surveillance because if the news were to leak, many officials would be embroiled in the scandal.

“Has the boss … left Chinese citizens to foot the bill?” the investor asked. The individual indicated he was repeating what he’d heard from other investors, and was unable to substantiate the claims.

The chairman of the board of the Huashi International Group, Li Wenhua, is a member of the Hubei Chinese People’s Political Consultative Conference, a kind of Party-controlled advisory body, and is the vice president of Hubei’s Chamber of Commerce.

Thousands of protesters were still on the streets on Nov. 28, even after security forces had been sent to shut them down.

The protesters may be banking on local authorities buckling to the pressure and bailing out the firm. While this would placate the current crowd, it would also reinforce the moral hazard in the banking sector, where all players expect they can lend with impunity, because the state will step in at the end of the day to stave off social unrest. This, however, would only prolong the time until a general debt crisis.