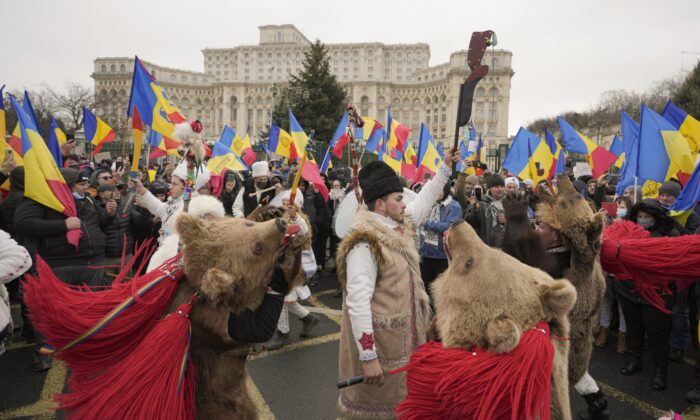 Romanians protesting the introduction of a COVID-19 "green pass" in the workplace gather outside the Palace of Parliament in Bucharest, Romania, on Dec. 21, 2021. (Vadim Ghirda/AP Photo)
WORLD

A large crowd of Romanians protested in the streets of Bucharest on Dec. 21 against the government’s proposal to make a COVID-19 health pass mandatory for workers.

Romania’s new coalition government is discussing the legislation that would require citizens going into their workplaces to present a “green certificate”—which is obtained by being fully vaccinated, presenting a negative test from the previous 48 hours, or having recovered from the CCP (Chinese Communist Party) virus.

The protesters, estimated at about 2,500, gathered in Romania’s capital outside the parliament building, waving the national flag and chanting “Freedom!”

A small group among the protesters briefly vandalized some cars, blocked traffic, and attempted to force their way into parliament before being stopped by riot police.

Paul, a protester who declined to give his last name, said Romanians “should have the freedom of choice” about the COVID-19 shots.

“It’s a medical decision, each of us should decide for our lives, I consider I’m a responsible person,” Paul said. “I think I went through the disease, and furthermore, there are too many questions unanswered.”

Samuel Zarnescu, another protester, expressed a view similar to Paul’s, saying he believes people should be able to make their own decisions on whether to be vaccinated.

Romania, an Eastern European nation with a population of about 19 million, is the European Union’s second-least vaccinated country amid distrust in state institutions—roughly 39 percent of the eligible population has been fully vaccinated. Some 2 million of those individuals have also received a booster dose.

In recent weeks, CCP virus infections in the country have dropped significantly to fewer than 1,000 daily, from more than 13,000 in October and early November, according to data by health officials.

According to a report by the European Centre for Disease Prevention and Control (ECDC), Romania is now considered a country of “low concern.”

Romania’s health ministry said in a Dec. 20 statement that the adoption of the law on the digital COVID-19 certificate “must take into account the interest of public health” but also cater to the “proper functioning of the economy.”

“The certificate will be introduced when there is a sustained increase of three consecutive weeks in the number of cases with a coefficient of 1.5 and will be discontinued when the trend goes downwards and the cumulative incidence falls below 1,” the ministry said in the statement.

Since the start of the pandemic nearly two years ago, more than 58,200 Romanians have reportedly died due to the CCP virus and about 1.8 million cases have been confirmed by health officials.