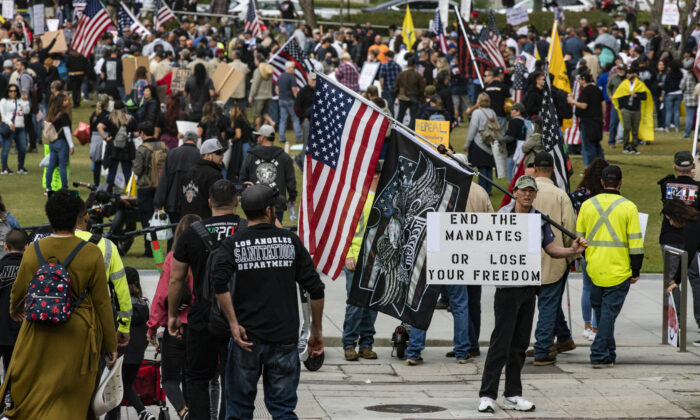 The city council voted in August to require its employees to be fully vaccinated by Dec. 18. Shortly after the approval, Mayor Eric Garcetti warned that those who refuse vaccination “should be prepared to lose their job.”

Many protestors were wearing clothes representing their agencies and departments of employment, including the police, fire, water and power departments, LA Metro, school districts, etc.

“This mandate will divide the residents, business owners, and visitors of this city and cause irreparable harm to the economy and vitality of Los Angeles,” according to a statement by Firefighters for Freedom, the organizer of the protest.

Pastor Rob McCoy, a former mayor of Thousand Oaks, was one of the event speakers. He referred to the COVID-19 vaccine as “experimental injection.”

Another speaker, Chris Rake, an anesthesiologist at the University of California–Los Angeles Medical Center, said he is currently on administrative leave due to being unvaccinated.

He criticized Dr. Anthony Fauci and the Centers for Disease Control and Prevention for creating confusion for the public and accused the vaccine mandate of violating civil rights.

“It’s wrong to violate somebody’s body against their will,” Rake said. “Medical ethics autonomy is one of the four pillars of medical ethics. As a physician, I was taught in medical school, I cannot force upon you, my patient.”

John Knox, of Firefighters for Freedom works as a firefighter and paramedic in the LA Fire Department, said approximately 20 to 50 percent of employees in the fire department will lose their job, which will exacerbate the ongoing staffing shortage.

“We will not be silent. They are not going to use intimidation, coercion, threats of our jobs to get us to be quiet,” he said.

Freddy Escobar, the president of the United Firefighters of Los Angeles, echoed Knox’s points, warning that the yearlong staffing shortage might worsen as hundreds of firefighters could quit their job over the mandate.

He said he hoped that the city council would offer an alternative, such as daily testing, for city employees to waive the vaccination requirement.

“All we’re asking for is to come back to the table and find a compromise,” Escobar said. “To have termination on the table is just simply not right,” said Escobar.

In October, some 871 LA firefighters have filed a notice of intent to sue the city over the mandate, citing it causes emotional distress, violates constitutional privacy rights, and undermines the Protection of Human Subjections in Medical Experimentation Act.