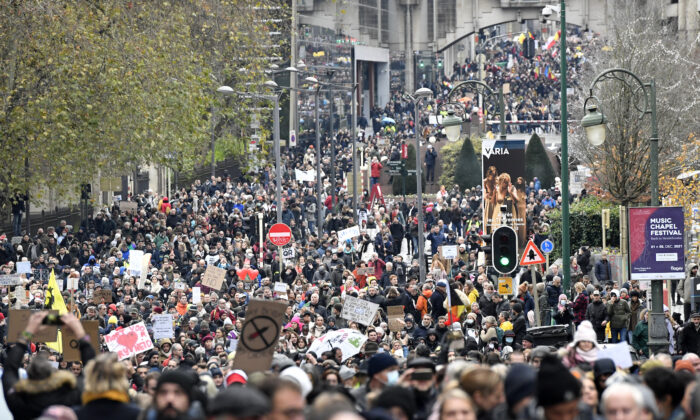 Tensions boiled over in the streets of Brussels on Dec. 5 as a minority of protesters clashed with riot police following an otherwise peaceful larger protest joined by thousands of people.

Protesters marched to Place Schuman, where major European Union buildings are located, to voice their concern over the government’s COVID-19 policies.

Leading the march were firemen and nursing staff who are facing suspension from front-line roles if they don’t receive a COVID-19 vaccine by Jan. 1, 2022, and dismissal on April 1, 2022, if not fully vaccinated by then.

Many pointed to hardship caused by their leaders’ decisions to prioritize virus suppression policies over other rights, such as freedom of movement.

Additional restrictions for Belgium were announced on Dec. 3, following two weeks of announcements that had already tightened rules around mobility and access to services.

“We want a democratic and non-dictatorial approach to this crisis,” one protest spokesperson said, The Brussels Times reported. “The measures taken, such as the Covid Safe Ticket, are contrary to our fundamental rights. The virus is not under control, but the population is.”

Many protesters were also concerned over suggestions about wider vaccine mandates and a potential nationwide rollout of a COVID-19 pass, dubbed the “Covid Safe Ticket.”

After the main crowd of the protest dispersed, around 100 protesters remained, facing off with riot police at a barricade set up to prevent access to the European Commission. After a brief standoff, a few individuals hurled trash and objects such as bicycles at police, while others set off flares. Police responded by dispersing those remaining with a water cannon and tear gas.

Four demonstrators and two police officers were injured, while 20 were arrested over the clash, the Belga news agency reported. Some police vehicles were damaged.

Police had prepared for provocateurs after a similar demonstration two weeks ago, which drew an estimated 35,000 people and sparked more violence than this protest, police told local media.

Later that night, around 200 protesters also gathered outside the RTBF Media Square in a demonstration against “the media lies and manipulation of people,” the Flemish national public broadcaster VRT reported. Police were able to hold back protesters who attempted to climb into the media offices.

Prime Minister Alexander De Croo on Dec. 3 said the increase in government restrictions is in response to the nation’s hospitals filling up with COVID-19 patients, which was delaying treatments for other life-threatening diseases such as cancer.

“There are too many people who are not getting the treatment they need in hospital, so it is important to act quickly,” he told reporters. He said that 40 percent of Belgium’s intensive care beds currently are occupied by COVID-19 patients.

“It’s a situation that cannot be tolerated,” he said.

De Croo announced mandatory mask wearing for children as young as 6, and said that day care centers and primary schools would close for the holidays a week early. Indoor weddings and funerals were also to be capped at 200 people.

Nightclubs, bars, and restaurants had already been ordered to shut at 11 p.m. on Nov. 26. At the time, the government had decided against suggestions to close venues at 8 p.m. Residents were also told they must work from home.

Currently, more than 3,700 people nationwide are hospitalized with COVID-19, with 821 of them requiring intensive care.

Hospital admissions rose 4 percent over the past week, as officials reported a 6 percent increase in COVID-19 cases.