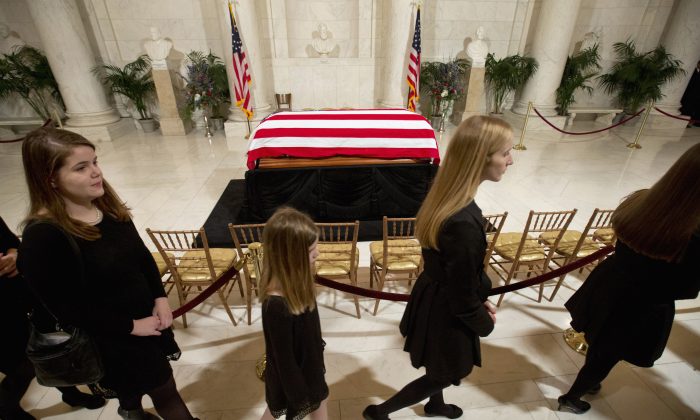 Relatives pass the casket of Supreme Court Justice Antonin Scalia as they leave a private ceremony in the Great Hall of the Supreme Court in Washington, Friday, Feb. 19, 2016, where Scalia lies in repose. (AP Photo/Jacquelyn Martin, Pool)
US

WASHINGTON— Bidding farewell to their longtime colleague, the eight remaining Supreme Court justices joined family members, former law clerks and members of the public Friday in paying their respects to Antonin Scalia in a tradition-laden, solemn day at the marble courthouse atop Capitol Hill.

The Rev. Paul Scalia, the justice’s son and a Catholic priest, said traditional prayers at a private ceremony before thousands of people filed through the court’s Great Hall, where Scalia’s casket lay on a funeral bier first used after President Abraham Lincoln’s assassination. “You have called your servant Antonin out of this world. Release him from the bonds of sin and welcome him into your presence,” the sixth of the justice’s nine children said.

Outside the court, meanwhile, a makeshift memorial was set up featuring jars of applesauce, a pile of fortune cookies and paper bags, items that figured in the outspoken conservative Scalia’s sharp dissents in recent cases.

On Friday, 98 former law clerks to Scalia lined the Supreme Court’s steps as a police honor guard carried the casket into the building beneath the iconic words “Equal Justice Under Law” just after 9:30 a.m. on a cool, overcast morning.

The justices stood near the casket in the same order they will sit on a reconfigured bench following Scalia’s death last week in Texas. Chief Justice John Roberts was between Justices Anthony Kennedy, the longest-serving member of the current court, and Clarence Thomas.

A 2007 portrait of Scalia by artist Nelson Shanks was displayed nearby. In it, the justice is shown surrounded by images representing important moments and influences in his life, including a framed wedding photograph of his wife, Maureen. The extended Scalia family gathered around the widow inside the court.

Scalia’s clerks also took 30-minute turns standing near the casket in groups of four, and planned to do so through the night until his body is taken from the court for his funeral on Saturday.

The court building was to be open for 9 ½ hours to allow visitors to file through. At one point, the line of people waiting to pay respects stretched more than a block and the wait to get in was 90 minutes.

Rhaleta Bernard from the New York City borough of Queens, where Scalia grew up, had been visiting Washington with her husband, Kelvin. They changed their bus tickets in order to pay their respects.

Bernard said Scalia “believes in interpreting the law, not making the law.”

“I want another Scalia,” said Bernard, a reading specialist. “I don’t think there’s another one, though.”

Visitors passed near the collection of flowers and goods people left to remember Scalia and some of his sharply worded comments. Scalia had called Roberts’ opinion for the court in last year’s health care case “pure applesauce.” He compared Kennedy’s majority opinion declaring the right of same-sex couples to marry to the “mystical aphorisms of the fortune cookie” and said he would hide his head in a paper bag if he ever joined such an opinion.

The Mass, open to family and friends, will take place Saturday at 11 a.m. at the Basilica of the National Shrine of the Immaculate Conception in Washington. Burial plans have not been released.

Scalia’s sudden death complicated an already tumultuous election year. His death gives Obama a chance to replace the conservative stalwart with a more liberal successor who could tilt the ideological balance of the court for decades to come.

Senate Majority Leader Mitch McConnell and other GOP leaders have said a replacement should not be named until the next president takes office. Obama has pledged to pick a replacement “in due time” and challenged Republicans to hold a vote on his nominee.

Scalia was found dead on Saturday in his room at a remote Texas hunting resort. The 79-year-old jurist was appointed to the court in 1986 by President Ronald Reagan.