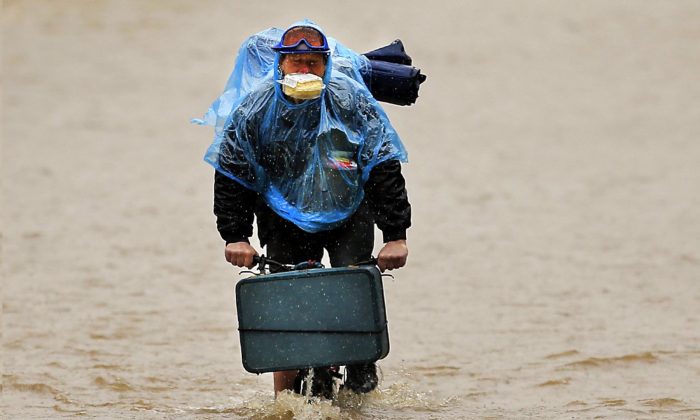 SAN FRANCISCO—Thousands of people along a flooded river were under evacuation orders Wednesday as a relentless storm pounded Northern California, drenching the San Francisco Bay Area and pummeling the Sierra Nevada with snow.

Some two dozen communities along the Russian River in Sonoma County were ordered evacuated Tuesday evening shortly before the waterway passed flood stage. Forecasters predicted it would peak at about 46 feet by Wednesday evening, which would be the highest level in about a quarter-century.

Authorities said evacuations were ordered for about 4,000 people in and around Guerneville, located about an hour’s drive north of San Francisco.

There also was concern about potential mudslides in hillside areas saturated from days of downpours, and in areas scarred by 2017 wildfires.

Earlier in the day, a mudslide near Monte Rio near Guerneville trapped a man and a woman before they were rescued, messy but unharmed.

“Well I fell into the mud when the tree fell over the top of me. It happened so fast you don’t even know, you know?” Kear Koch told KGO-TV.

Elsewhere in Sonoma County, several people had to be rescued from cars that became stranded while trying to drive through flooded roads, including one woman who was rescued by boat.

Earlier Tuesday at the River Inn Grill in Guerneville, workers were preparing by putting perishables on high shelves in storage rooms.

But manager Andre Vazquez said the one-story building could be largely submerged that if the river reaches 46 feet.

“A couple of weeks ago people were using kayaks to get to their mailbox,” Chung said. “If it gets really bad, we’ll get out.”

But Dee Dee Rydberg removed computers and printers from her business, Guerneville Graphics and Printing.

“We’re getting ready for the flooding. My threshold is 43 feet,” she told KPIX-TV. “Flood insurance raised 800 percent throughout the area. I could not afford to buy flood insurance. So I’m packing up my stuff and getting out.”

Several communities also were under evacuation orders in Butte County because of flooded creeks. Other waterways, including the Napa River, also were expected to overflow their banks as an ocean-spanning plume of moisture continued tracking through the West. It already closed roads and schools and toppled trucks and trees from Oregon to Montana.

The National Weather Service also issued flood warnings and flash flood watches for the San Francisco Bay Area and many parts of the Sacramento area, lasting into Thursday morning.

All Flood Watches & Advisories have been upgraded to a Flood Warning through Thursday morning. Heavy rain will continue to bring flooding concerns to roadways and area creeks & streams. Never drive through flooded roads! #CAwx pic.twitter.com/zNZU0urKtS

Relentless rain forced the cancellation or delay of hundreds of flights in San Francisco and the city of Santa Rosa received a record 5.66 inches of rain, making it the wettest day for the date since at least 1902.

In the Sierra Nevada, the California Department of Transportation reported that a maintenance yard above 6,000 feet had received 30 inches of snow along on Tuesday.

Caltrans reports a storm total of 56 inches of snow at their Kingvale Maintenance Yard on I80 at 6200 feet, This is a gain of 30 inches since 6 am this morning! I80 remains closed at this time. for current info go to https://t.co/if6ShiTCCf @CaltransDist3 #cawx

Several mountain and foothill roads were repeatedly closed because of whiteout conditions or to clear trucks and cars that spun out on the slippery pavement.

Interstate 80, a major road that winds over the Donner Summit, was to remain closed into Wednesday morning for about 50 miles, from Colfax to the Nevada state line.