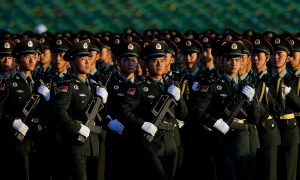 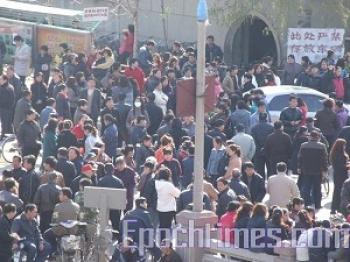 Thousands of workers at Yimian Group in Hebei Province have been on strike for over seven days. (The Epoch Times)
China

Thousands on Strike for Over Seven Days in Baoding, Hebei Province

For seven consecutive days, workers at the Yimian Group in Baoding, Hebei Province, have staged a large-scale strike. In order to prevent the new buyer of the company from moving out the equipment, several thousand workers surrounded the factory, and stood on watch day and night. According to workers on the scene, the strike was still going on as of April 3. Some workers have gone to Beijing to appeal for readdress of the injustice. Although the local  authorities sent an investigational group to the factory,  that didn’t remedy any of the issues.

Yimian Group is an old enterprise with a 50-year history. In 2003, the company had 9,021 employees. In 2004, in a re-organization,  all of its shares were sold to the Zhongce Group in Hong Kong. Subsequently, Zhongce Group established a specialized company called Asian Textile Enterprise. After this re-organization, a large number of workers were laid off, with only four thousand  being retained.

The reason  for this large-scale strike was because several thousand workers learned at the end of last month that the company has been secretly sold, but no workers had been told anything about it. Only about one hundred of the nearly four thousand workers will be retained to work at a new factory in Baoding county. The rest will all be laid off. Since last Friday, almost ten thousand workers, including those already retired from Yimian Group, spontaneously went to the factory to watch over the equipment.

The workers disclosed many illegal transactions before and after the reorganizations, including  severe loss of state-owned assets. They explained that after the reorganization five years ago, the promised $50 million investment in three years after the buy-off  was never made. For five years, the payment for employee compensation was delayed, and the retirement insurance also has not been  paid.

Workers stated that the factory originally had $700 million in assets, but now has nothing. The factory has been sold, and the money has disappeared. Now the new buyer and city government cannot or will not answer questions raised by the workers about these transactions.

One worker, Mr. Liu, told this reporter, “This strike has been going on for seven days. The bosses of the factory terminated the contracts with workers for no reason, and halted the production. The factory has been sold. Those  bosses swallowed up all the money, and now the workers have no way to make a living.”

Another worker said, “We are protecting the factory. The leaders planned to sell all the equipment, but the workers protected the factory. Everyone from eighty-year old retirees to young workers and old leaders all came out to ask for justice. Now is the peak time of the strike. Workers are especially angry.”

Mr. Liu said, “The city government sent an investigation group to investigate and maintain  order. However, their true responsibility was to monitor the situation. There are many  plainclothes as well as uniformed police outside—nearly 200 to 300 people. We dare not to go in and out freely because we are afraid of being arrested. Now Baoding is blocking the  news of the strike, not publicizing anything.”

When an Epoch Times reporter called the city government of Baoding to inquire about the strike, a staff person there dismissed the call, saying that he is not aware of this matter and that any interview should be directed to the Propaganda Department.”