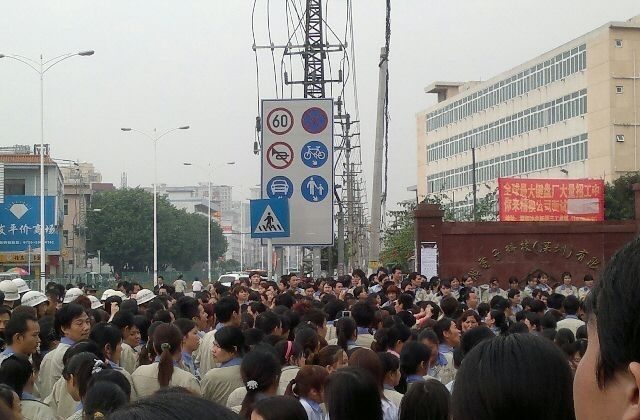 Thousands of Workers Strike at Plant in Shenzhen, China

In Shenzhen in southern China more than two thousand workers at the Jing Mold Electronic Technology Co., Ltd., a subsidiary of the Taiwan-based Sunrex Technology Corp. that manufactures computer keyboards, went on strike on the morning of Nov. 22 to protest unreasonable arrangements for overtime. Workers attempted to block National Highway 107 when they walked out of the plant, but local authorities dispatched hundreds of anti-riot police to dispel the crowd.

A worker at the plant named Huang told the Epoch Times that the main reason for the strike was low wages and long overtime hours.

“The strike was triggered by unreasonable overtime. All of the workers in the plant went on strike yesterday (Nov. 22). Our overtime work in the weekdays may drag on to midnight,” Huang said.

“At times, we have to work all night long. In contrast, there is no overtime during the weekends. We are demanding a rational arrangement for overtime. In addition, we also demand that any employee who has been associated with the company for more than one year should be compensated with 1-month in wages if he or she is dismissed,” Huang said.

Li, another worker at the plant, explained that they were discontent with the company’s overtime arrangements. The hourly overtime payment on a normal work day is 150 percent of the regular hourly rate, but the rate increases to 200 percent on weekends and 300 percent on holidays.

When the strike broke out, hundreds of militia, public security and anti-riot police were sent to cordon off the scene. The police lined up so as to quarantine the workers who blocked the road. Huang said the police prohibited the workers from going to the streets and forced them to return to the plant. No major conflict occurred in the process.

The strike in Shenzhen was the second on in a week involving a firm in which Taiwanese have invested. In the morning of November 17, a major strike occurred at Yucheng Shoes Factory, located in the Yuyuan Industrial Park, Huangjiang Township, Dongguang City, in Guangdong Province in southern China.

More than 6,000 workers walked off their job and went on strike, protesting the company’s plan to slash bonuses. They blockaded the road and paralyzed local traffic. Local authorities sent in almost 1,000 anti-riot police to suppress the strike. During the clash, several workers were injured by the police and hospitalized. The 19 people arrested by the police were released at four o’clock in the afternoon of the same day.