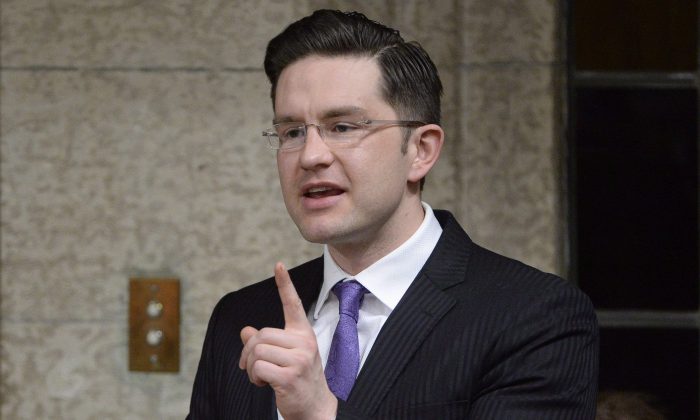 Employment Minister Pierre Poilievre answers a question in the House of Commons on March 23, 2015. In 2011, the Conservative government set April 1, 2015, as the deadline for temporary foreign workers in low-skilled jobs to either become permanent residents or return home. (The Canadian Press/Adrian Wyld)
Canada

OTTAWA— The clock ran out on April 1 for thousands of temporary foreign workers in Canada as work permits expired for those who have been in the country for more than four years.

In 2011, the Conservative government set April 1, 2015, as the deadline for temporary foreign workers in low-skilled jobs to either become permanent residents or return home.

In Alberta alone, 10,000 temporary foreign workers have applied to stay in Canada.

Immigration Canada hasn’t divulged the total number of workers who must leave April 1, but immigration and labour market experts have estimated tens of thousands are affected.

Richard Kurland, a Vancouver immigration lawyer, says temporary workers with legal representation have found ways to stay past the deadline with so-called bridging options that could lead to permanent residence.

But many workers can’t use that approach, he says.

“The sad thing is that the victims are people unable to access bridging provisions that would have given them more time in Canada … because a large number can’t access immigration lawyers; they can’t afford it,” he said.

Vanessa Routley, a Toronto immigration lawyer, was critical of the deadline.

“The four-year limit deliberately and unfairly targets the lowest-paid and lowest-skilled temporary workers … executives and engineers will not be affected,” she said.

“Rather than offering these hard workers a pathway to permanent residence where they could continue the low-skilled jobs nobody else wants, the Canadian public has been sold a line that exchanging one legion of temporary workers for another every four years is a solution.

“Our policy is that Canadians should come first for Canadian jobs,” Poilievre said after Wednesday’s weekly caucus meeting.

“The April 1st deadline has been known for a very long time, and the purpose of the program is for it to be temporary. That’s why they’re called temporary foreign workers.”

Businesses should increase their wage rates and hire Canadians if they’re struggling to fill positions, he added.

But Liberal Leader Justin Trudeau accused the Conservatives of further “mismanagement” of the temporary foreign workers program with the April 1 deadline.

“This is yet another example of a government that lacks both compassion and a flexible reasonableness around supporting both Canadian businesses and industries and some very vulnerable people who are continually hoping for a path to citizenship,” Trudeau said.

Several organizations, including the Canadian Federation of Independent Business and the Alberta Federation of Labour, have called for an easier path to permanent residence and eventually citizenship for temporary foreign workers, especially those employed in provinces with labour shortages.

The CFIB has warned that hotel rooms won’t be cleaned and the lineups at fast-food restaurants will move a lot more slowly with fewer foreign workers.

“What we need is real immigration. We also need better training—both in our schools and from employers—so that Canadians can benefit from the opportunities offered in our national and regional labour markets.”