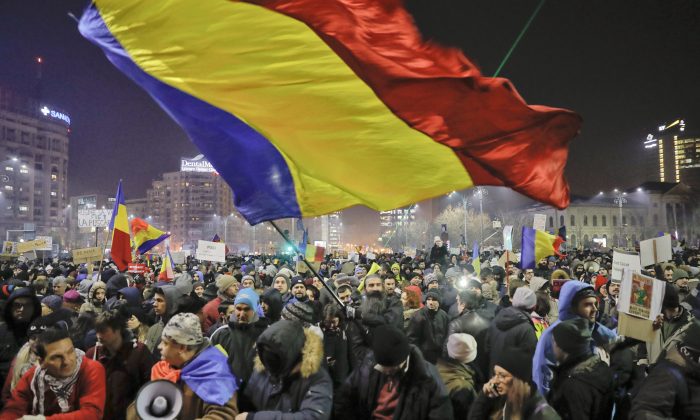 A man waves a large Romanian flag during a protest joined by tens of thousands against a government decree that dilutes what qualifies as corruption, in Bucharest, Romania, on Thursday, Feb. 2, 2017. (AP Photo/Vadim Ghirda)
International

BUCHAREST, Romania—Tens of thousands of protesters again took to the streets of Bucharest and other Romanian cities on Friday, blowing whistles, waving giant Romanian flags and booing at giant puppets of politicians they hold responsible for a decree to dilute the country’s anti-corruption fight.

People of all ages, some carrying children, took part in protests around the country for the fourth consecutive evening. The atmosphere was one of anger against the government, but also of solidarity and hope for change. Some carried banners saying “I came for my future.”

The demonstration came amid a deepening political crisis after two key government allies said Friday that the emergency government decree passed early Wednesday without input from parliament was not constitutional. Even the influential Romanian Orthodox Church criticized the measure, which critics say will allow corrupt politicians to escape punishment.

Ombudsman Victor Ciorbea, who previously backed the government’s ordinance, reversed his position Friday, and said he would tell the Constitutional Court that the decree to decriminalize official misconduct under a certain dollar amount was “not justified.” He said the measure risked “taking out of the reach of criminal law almost all the public administration.”

In another setback for the government, the Orthodox Church, to which more than 85 percent of Romanians belong, said that the anti-corruption fight should continue and those found guilty should be sanctioned.

Earlier, Justice Minister Florin Iordache said he stood by the law, defying strong criticism from home and abroad and days of massive protests.

The ruling center-left Social Democratic Party has defended the decree, which has sparked some of the biggest protests since the 1989 fall of communism. Its leader, Liviu Dragnea, who has been blocked from becoming prime minister due to a vote-rigging conviction, is among those expected to benefit from the decree.

Romania’s Constitutional Court will rule on the legality of the law on Tuesday, the last legal resort to stop it.

Speaking Friday at a European Union summit in Malta, President Klaus Iohannis said he trusted the protesters more than the government.

“We have hundreds of thousands of my Romanians out on the streets, and I trust them,” Iohannis said. “I believe in Romania … European values have to prevail and this is what I believe will happen. “

U.S. State Department spokesman Mark Toner said the U.S. was “deeply concerned” about recent government decree that “that undermine rule of law and weaken accountability for financial and corruption-related crimes.”