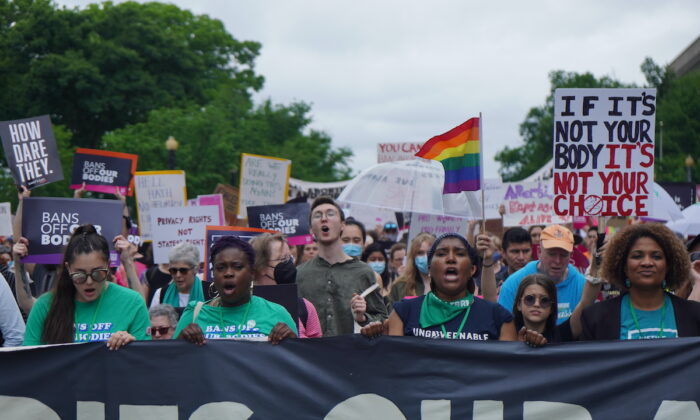 The front of the Bans Off Our Bodies march in Washington on May 14, 2022. (Jackson Elliott/The Epoch Times)
US News

Thousands of Pro-Abortion Protesters March to the Supreme Court

Despite rainy weather, the area saw the largest Washington pro-abortion protest since a leaked Supreme Court opinion suggested that the court might overturn Roe v. Wade.

The protest march started at the Washington Memorial, organized by the Women’s March. Compared to previous D.C. abortion protests, the starting crowd sounded far less angry and included a wider variety of ages.

“We want to fight for women’s rights. We want to make it known that it’s a bigger issue than people think,” said Rhaegan Walker, a protester from Suffolk, Virginia.

Walker added that she wasn’t worried about being arrested for protesting outside the house of a Supreme Court justice.

“That’s not something I’m personally worried about. I will get arrested for something I believe in,” she said.

Protesters also came to the march from farther away. Pro-abortion protester Daniel Smith and his family arrived at the abortion march from Michigan.

“My wife got pregnant in college. And our daughter, the result of that, is right there,” said Smith, gesturing toward a girl carrying a sign reading “Do I look old enough to be a mother?”

“And we were very young,” he said of him and his wife. “I don’t know how life would have been different if we felt that we had the option not to be parents as college juniors,” he said.

From the time the Supreme Court decided Roe V. Wade, Americans have performed over 63 million abortions, according to estimates from the National Right to Life Committee. Yearly abortion totals have declined since their peak soon after Roe v. Wade. In 2018, Americans performed 871,000 abortions. Pro-life activists believe that abortion is murder because it kills babies before they are born. A recent poll by NBC suggests that 60 percent of Americans say abortion should be legal in most or all cases.

The abortion march began with a ritual invocation by activist Sarah Eagle Heart. She noted that the protest was taking place on “colonized land” and thanked “all the ancestors” for allowing the protesters to be there.

Eagle Heart said colonialism covered up the fact that American Indians had a tradition of abortion using herbal medicine, and that women then were able to choose abortion with advice from tribal elders.

Afterward, the march’s director, Rachel Carmona, spoke. Carmona announced to the crowd that she was “very angry.”

“Five Supreme Court Justices decided they didn’t give a [expletive] about women,” she said. “We will be ungovernable until this government starts working for us.”

Chants of “Ungovernable” spread in waves through the crowd.

Then, Carmona announced a “summer of rage.”

“Today is day one of our uprising for abortion rights,” she said.

Several speakers said that if the Supreme Court overturned abortion, it would also overturn gay marriage, forbid transgenderism, and even end interracial marriage.

“We all know that this is a crisis moment,” said Rep. Barbara Lee (D-Calif.).

After about two hours of speakers, the abortion march started toward the Supreme Court.

A line of police vehicles cordoned off the street, and security for the march worked to clear a path through the crowd so the leading march banner could move forward.

“Our Bodies, Our Abortions,” the banner carried by the foremost marchers read.

A wide variety of distributed and homemade signs waved behind it. “Abortion is freedom,” one read. “My abortion made me a better mother,” read another.

The marchers set out at a slow pace. The densely-packed crowd appeared to cover at least a half-mile of Constitution Ave.

The protesters accompanied the march with chanting. Several different sections of the crowd shouted different chants.

Along the route, the crowd shouted “Whose streets, our streets,” “What’s the call, abortion for all,” and “My body, my choice.”

Many of the watching crowd on the sidewalk joined the march as it went.

For the first part of the march, there were almost no pro-life protesters. At the corner where the march began, Jonathan Darnel, the creator of pro-life website GetSeriousChurch.com, stood with a large sign and a couple of other protesters.

The march arrived peacefully at the Supreme Court, where it met a crowd of pro-life protesters behind a police line. As the pro-abortion protesters and the pro-life crowd saw each other, both groups shouted at each other.

Pro-abortion activist group Ruth Sent Us announced on Instagram that it planned follow-up protests outside the houses of Supreme Court justices Saturday night.

“It is unlawful—it is against the law in this country to protest a sitting judge,” said House Republican Conference Chair Elise Stefanik of New York. “We want to maintain the independence of our courts. And the fact that that is being encouraged by this administration is shameful. It’s unconstitutional. It’s meant to intimidate the justices.”

“I know that there’s an outrage right now, I guess, about protests that have been peaceful to date, and we certainly continue to encourage that, outside of judges’ homes. And that’s the president’s position,” she said.