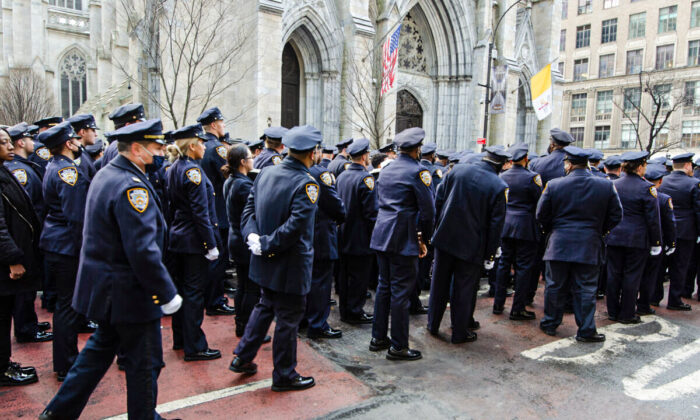 NEW YORK—For the second time in as many weeks police officers from far and wide assembled on Feb. 2 at St. Patrick’s Roman Catholic Cathedral in New York for the funeral of one of their own.

A funeral mass was held at 10 a.m. (EST) for Wilbert Mora, the second of two policemen who were recently shot and killed in the line of duty.

The funeral of the first fallen officer, Jason Rivera, was held at St. Patrick’s last week.

Although overcast and damp there was no rain as Mora’s brethren assembled in front of the church on Fifth Avenue.

The funeral began with organ music, a cantor, and a choir singing a hymn based on Psalm 23—”The Lord is my Shepherd; I shall not want”—followed by the traditional “Hallelujah” hymn.

The mass was said in both English and Spanish.

“This morning we gather to mourn the life of Wilbert Mora, our brother officer and brother citizen,” Adams said. “We reflect on his bravery. We remember his sacrifice.”

Adams promised police that his administration would give them “the resources to fight this senseless violence.”

Mora’s sister Karina Mora spoke of her brother in Spanish, as did their cousin Clarabelle.

Mora’s brother Wilson Mora spoke directly to his deceased sibling, reading a letter he wrote to him, beginning with “Dear Wilbert.” He reminisced about their childhood together.

“Mom showered us with love, and you absorbed it like a sponge,” he said. “I love you baby bro, and I will always miss you.”

Police officers in attendance included ones from neighboring New Jersey, as well as more distant locales such as New Castle County, Delaware; Fort Worth, Texas; and Saudi Arabia.

Handlers with therapy dogs from the NYPD’s Employee Assistance Unit were on hand for anyone who needed them.

Dozens of police cars from a host of different precincts formed a lengthy motorcade with lights and sirens after the funeral mass started. It ran west to east along West 46th Street across midtown Manhattan, in the direction of Fifth Avenue and St. Patrick’s Church.

On Jan. 21, Mora, Rivera, and a third policeman responded to a domestic dispute involving a mother and her son in the Harlem section of Manhattan, where Mora and Rivera were shot by the son.

Rivera died on the night of the shooting and Mora, a 27-year-old immigrant from the Dominican Republic, succumbed to his wounds on Jan. 25.