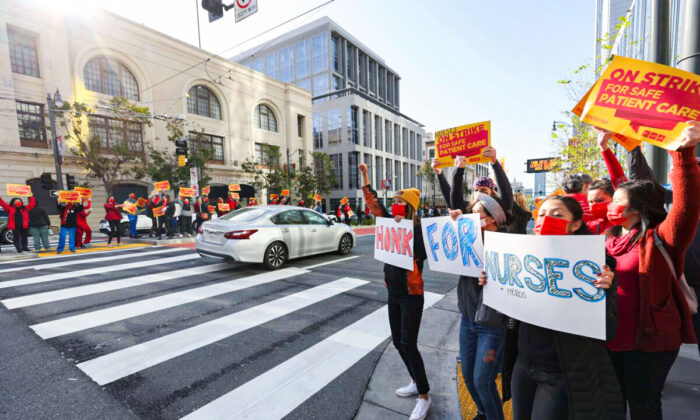 Sutter Health nurses and health care workers hold signs as they participate in a one day strike outside of the California Pacific Medical Center Van Ness Campus in San Francisco, California, on April 18, 2022. (Justin Sullivan/Getty Images)
US News

Thousands of nurses at Stanford Health Care and Lucile Packard Children’s Hospital in California are striking this week over contract issues, staff shortages, burnout, and exhaustion.

Nurses began their strike on Monday morning. The labor union representing the nurses, the Committee for Recognition of Nursing Achievement (CRONA) announced the strike on Sunday, saying 93 percent of eligible nurses voted to authorize the strike.

In a statement, Colleen Borges, president of CRONA and a pediatric oncology nurse at Packard Children’s Hospital, called on the hospitals to “demonstrate leadership” and work with nurses to “solve the burnout and exhaustion that is driving many of us to reconsider our jobs and our profession.”

“A strike has always been the last resort for CRONA nurses, but we are prepared to stand strong and make sacrifices today for the transformative changes that the nursing profession and our patients need,” said Borges.

The strike comes amid the collapse of contract negotiations. Their contract expired on March 31, and CRONA says three bargaining sessions with a federal mediator were unsuccessful.

Stanford nurse Mark O’Neill told The Mercury News he and other health care workers are burned out.

“I’m exhausted, but we need to push really hard to get help for the issues we’re facing,” said O’Neill. “We’re asking Stanford for a change.”

“Nurses are exhausted, and we’re burning out,” said Brown. “Striking is a last resort, but the hospitals are refusing to take our well-being seriously.”

Operating room nurse Anthony Veitch told FOX 2 KTVU that Stanford “has really got to step up their game” in order to make nursing attractive and for people to stay on the job.

“Nurses are caregivers, and so we give ourselves, and we give up our families, we give everything for the patients in the hospitals,” critical care response nurse Maureen Sullivan told the news outlet. “That’s a behavior that needs to change if we’re going to keep nursing safe. We have to start thinking of ourselves.”

An end date for the union hasn’t been announced yet.

According to FOX 2 KTVU, some procedures and services have had to be reduced or rescheduled because of the strike.

Stanford Health Care management said in a statement that “we respect our nurses’ legal right to take part in a work stoppage but are deeply disappointed that the union chose this path. A union work stoppage is a serious event that is disruptive to our patients, families, and colleagues. The impact can be deep, long-lasting, and costly.”