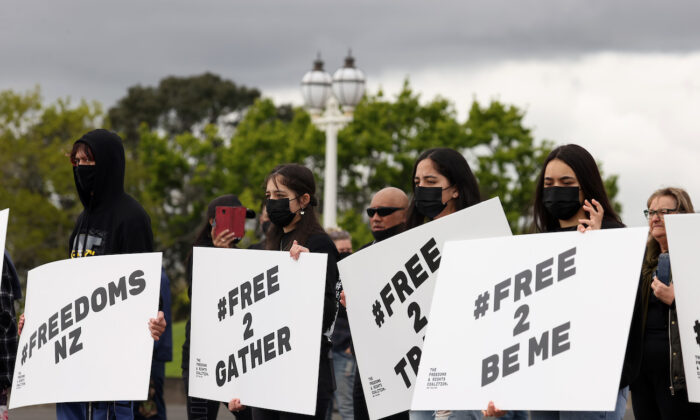 Thousands of people in New Zealand gathered in Auckland and multiple locations across the nation on Oct. 2 in a show of solidarity against alleged government tyranny and in support of freedom.

Auckland, with a population of about 1.7 million, continues to be under a government-prescribed lockdown that limits movement with the exception of certain “permitted reasons.”

Prime Minister Jacinda Ardern had enforced a nationwide snap lockdown on Aug. 17 in response to the nation’s first case of the Delta variant. She then said in September that she is aiming for a 90 percent vaccination rate before she will move away from lockdown orders. This includes in Māori and Pasifika populations, which will be difficult due to hesitancy and people who choose not to take the vaccine.

With the exception of Auckland, New Zealand has largely returned to less restrictive operations under “Alert Level 2.” The city was also downgraded to the looser lockdown Alert Level 3 on Sept. 21, although the government warned that it could announce Level 4 restrictions at any time. On Sunday, Ardern announced another five-day snap lockdown at Level 3 for parts of regional Waikato after two new cases were detected.

About 1,000 to 3,500 people gathered at the Auckland Domain on Saturday at around 11 a.m. for a “Families Freedom Picnic” as well as a peaceful protest the organisers called a “mass stand” in front of the Auckland War Memorial Museum.

Families with children attended, setting up picnic blankets in the area. Several dozen motorcyclists arrived at the event in a motorcade convoy as part of their protest.

There were also tractors at the event in support of farmers who were protesting for their freedom to farm.

One day prior to the event, a video from the organiser, the Freedoms and Rights Coalition, emerged, asking, “What is Freedom?”

“Think about this: We’ve now been locked up in our homes for the past six weeks, enslaved to four walls—a prison inside our own homes, yet guilty of nothing. How many more lockdowns before they take away all of our freedoms?” a female can be heard saying in the voiceover. “And who stole those freedoms, you might ask? It’s the very people we are meant to trust in—the government.”

She says in the latter part of the video, “If we do not have the freedom to go to school, see friends, socialize, and choose whether we want the vaccination or not, then what kind of life are we now living?

Ardern has urged all New Zealanders to get vaccinated so that she can avoid ordering more lockdowns. But the protesters said they don’t agree with the government’s balance of risk.

Brian Tamaki, a member of the Freedoms and Rights Coalition and the leader of the Destiny Church, took the stage at the event and spoke for about 40 minutes.

Police were monitoring the Auckland protest with no arrests or infringements issued, local media reported.

“No one should fear being arrested if they remain peaceful,” event organizers said ahead of time.

Auckland Council director of customer and community services Claudia Wyss said the council did not permit, support, or endorse the event, reported stuff.co.nz. “While we respect people’s rights to peaceful protest, we have serious concerns that the gathering may result in the spread of COVID-19 and risk the health of Aucklanders,” she said.

Organisers plan at least two more similar protests—one on Oct. 16 with two mass stands in Auckland and Christchurch, and another on Oct. 26 with a mass stand in Wellington.

Ardern’s government is set to decide on Oct. 4 whether to downgrade restrictions in Auckland to Level 2. However, border rules that prevent travel to and from Auckland are likely to remain, she warned.

Under the current “Alert Level 3” restrictions, Auckland permits certain businesses and services to operate, which includes early learning centres and schools for children up to year 10 whose parents or caregivers need to work.

Gatherings are permitted for weddings, civil union ceremonies, funerals, and tangihanga (a traditional Māori funeral rite) for up to 10 people. Masks remain compulsory outside the home.