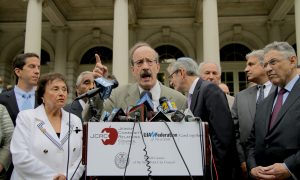 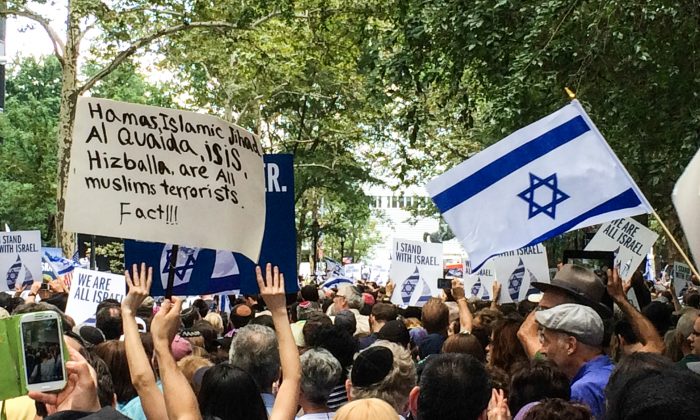 NEW YORK—More than 10,000 New Yorkers were joined by the New York Congressional delegation and other NYC officials Monday afternoon at the 90-minute long “New York Stands with Israel” rally at Dag Hammarskjold Plaza in Midtown Manhattan.

The rally was organized by the UJA-Federation of New York and the Jewish Community Relations Council of New York, which had sent notices of the rally to community groups, synagogues, and via social media.

When attendance was at its peak, the plaza was packed with people standing shoulder to shoulder, abounding with Israeli flags and pro-Israel posters. The organizers had distributed posters with the text “Israel Forever,” “I Stand with Israel,” and “We Are All Israel” to the crowd.

Many of the rally attendees brought their own posters, some of them solemn, others more humorous. Cardboards with the Hamas leader Khaled Mashal pictured next to Osama bin Laden could be found with “Hummus – Yes, Hamas – No” signs.

He was greeted with applause from the crowd, who chanted twice “Ahm Yisrael Chai”—”the nation of Israel lives” in Hebrew—and “We stand with Israel.”

Speaker after speaker voiced their unequivocal support for Israel and its recent military incursions into Gaza, while at the same time acknowledging the tragedy of the loss of human life caused by the conflict.

“We seek peace. We regret the loss of life,” said Sen. Chuck Schumer,” but there can be no long-lasting peace until Hamas is disarmed.”

Forty-two Israelis and more than 1,000 Palestinians—most of them civilians—have been killed since the start of the recent hostilities, triggered by the kidnapping and murder of three Israeli teenagers by a rogue Hamas cell.

Schumer defended Israel’s military operations, stating that if London and Paris were being targeted by missiles, England and France wouldn’t react with passivity.

New York Congressman Eliot Engel continued with the analogy, saying that the United States would never tolerate missiles coming from across the Canadian or Texan border.

“Our support for Israel will continue, and we will send to Israel foreign aid year-in, year-out, all the time,” he told the cheering crowd. Near the end of his speech Engel announced he was sponsoring a bill to send additional aid to Israel to reinforce its Iron Dome missile defense system.

A small group of Orthodox Jews of varying ethnicity, stood across the street from the United Nations Headquarters, loudly and vehemently exhorting: “Palestine yes; Israel no—The State of Israel must go!”

One of the protesters, Joel Pollak said that he and his companions are in firm opposition to Israel’s militaristic action against Palestinians.

True “traditional Jews” would never advocate the brutal measures that Israel has used against Palestine, Pollak said. They are not following their tradition, he added. “They murder and kill innocent people, who are just fighting for their homeland; they’re not following the Torah.”

The group was violently admonished by passersby, enroute to the pro-Israel rally.

Many of the speaker’s framed the recent conflict as a part of a larger fight for the survival of the state of Israel.

“Israel has a right to exist as a Democratic Jewish State and no one can ever take that away,” said Brooklyn Congressman Hakeem Jeffries.

“What’s at stake here is the survival of Israel. The reality is there are many people around the world saying ‘death to the Jews’, that is what’s going around the world; we have missiles coming into Israel everyday,” said NYC comptroller Scott Stringer.

He urged the crowd to help support Israel by shoring up Israel’s position in the realm of public opinion.