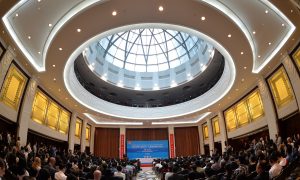 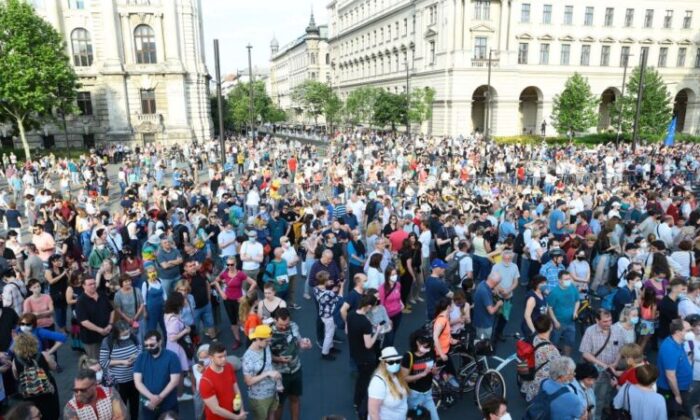 Demonstrators take part in a protest against the planned construction of Chinese Fudan university campus in Budapest, Hungary, on June 5, 2021. (Ferenc Isza/AFP via Getty Images)
Europe

Thousands of protesters gathered outside the Hungarian parliament building in Budapest on June 5, pushing back on a Chinese university’s plans to open a satellite campus in the city.

Critics have expressed concern regarding restrictions to academic freedom in China, as well as Beijing’s political influence in the East European country.

On June 5, several protesters were seen marching toward the Hungarian parliament building, holding signs with slogans such as “China Stop,” “Treason,” “No Fudan,” and “Support Hungarian Education.”

In April, a strategic deal was signed between the Hungarian government and Shanghai-based Fudan University—one of China’s top universities. According to the agreement, the university would create a campus in Budapest by 2024, and the Hungarians would make a huge investment in the project. Previously, the government had planned to build a dormitory village for Hungarian students in the city.

The proposed campus would be the university’s only foreign branch and also China’s first among the EU’s 27 member states.

Critics have accused the Federation of Young Democrats–Hungarian Civic Alliance (Fidsez) party of Hungarian Prime Minister Orbán Viktor of attempting to gain favor with Beijing, worrying that the Chinese campus will undercut the quality of the country’s higher education and help promote Beijing’s influence in the former communist country—and in the EU.

The mayor also said in a June 2 Twitter post that he welcomes “foreign universities that are not linked to oppressive state ideologies, are transparent,” and aren’t disadvantageous to Hungarian taxpayers.

On June 5, a netizen with the username dora1234view commented: “What happened in Hungary show[s] totalitarianism is spreading and it is well supported. It shows [the] EU is at risk.

“It is time [for] action. Without consequence, totalitarianism will control EU.”

In mainland China, communist authorities keep a close watch on domestic universities and colleges. Surveillance cameras are found in every classroom. Dissenting voices from teachers or students are likely to be reported to administrators or police by peers if deemed to be “anti-China” or “anti-Party” remarks.

Historically, Fudan University was one of China’s most prestigious institutions for higher learning. However, the CCP began to bring the school and many others under its direct control when it came to power by force in 1949, pushing its communist ideologies.

In 1952, then-Chinese leader Mao Zedong appointed Chen Wangdao, the first Chinese translator of the full text of “The Communist Manifesto” to be Fudan University’s president.

“The Communist Manifesto,” written by Karl Marx and Friedrich Engels in 1848, is idolized as the first programmatic document by communists.

The CCP’s ideological control over Fudan university has been so extensive that a School of Marxism was created in 2014 with the aim to cultivate young talent for the ruling party.

In 2019, Fudan University drew attention for its controversial revised university constitution. Notably, “freedom of thought” was deleted in the latest edition, while “adhering to the CCP’s leadership” was added to and highlighted in the update. In addition, the concept of “academic independence” was made much less prominent in the document.

Xu Zhenqi and Reuters contributed to this report.