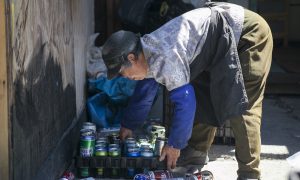 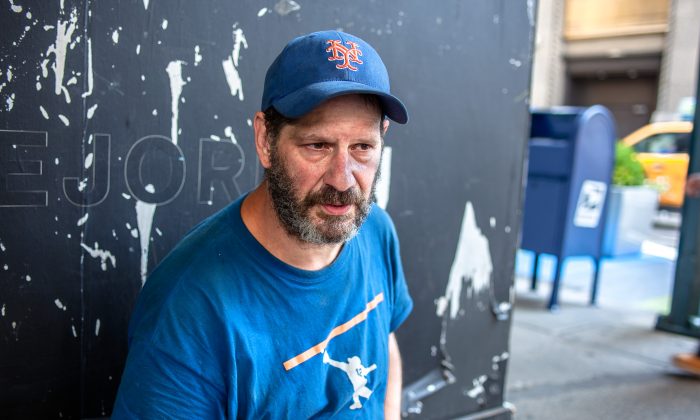 Darren Miller, 49, who has been homeless for six years, across the street from the Madison Square Garden in Chelsea, Manhattan, New York, on July 27, 2015. (Petr Svab/Epoch Times)
New York

NEW YORK—Darren Miller, 49, and homeless, kept track of the years by noting how many World Cups passed. It was startling when he realized that he had been sleeping on the streets for six years. He hadn’t planned on being homeless for that long. He was a cook with a liberal arts education.

After a brief stint in prison, which he declined to elaborate on, Miller could not find employment.

For thousands of homeless people in New York City, many said that passing time on the street was more bearable than going through the shelter system.

So here he was, sitting on a sidewalk in Midtown, with his cardboard sign and a book about vampires.

He did not particularly enjoy reading about vampires. But he read everything he could get his hands on. “It is a little too Y.A. [Young Adult] for me,” he said. “But it’s all right. It passes time.”

Much of being homeless was about just that, passing time. For thousands of homeless people in New York City, many said that passing time on the street was more bearable than going through the shelter system where they can access counseling and employment referrals.

A Resistance Toward Traditional Shelters

“It’s a small space that you’re in, and you’re in there with people who are mentally ill and not taking their meds,” Miller said. “There’s drunk people there too. They’re not supposed to let them in, but they do.”

There were 56,000 people staying in shelters in July 2015, according to NYC Department of Homeless Services (DHS).

The agency has a bed available for anyone who is homeless. No application is required to stay in the shelter either. There are programs that help the homeless get permanent housing and even employment. It helps with eviction prevention. It connects people to caseworkers.

There are more than 3,000 people who choose to sleep in the city’s subways, parks, and streets.

Yet there are more than 3,000 people who choose to sleep in the city’s subways, parks, and streets, according to DHS’s annual count.

What is keeping thousands of people like Miller homeless when benefits are available?

Craig Mayes, CEO of NYC Rescue Mission, a nonprofit a that feeds, houses, and rehabilitates the homeless, has been thinking about this question.

“‘I’ve had to work very hard to convince some to try the New York City Rescue Mission where we offer respect to all and a secure safe environment—and many still choose to stay outside,” Mayes stated in an email. “The reasons vary. Some struggle with mental illness so what appears to us as an irrational decision to turn down shelter and remain in uncomfortable or life-threatening conditions is not being made on the basis of sound thinking.”

“Many others I’ve spoken to have had really bad experiences in shelters including theft and violence, and they would rather take their chances outside,” he wrote.

Homeless people like Miller believed that the caveat was that one needed to stay in the shelter before one can be eligible for permanent housing.

“The irony is that in order to benefit from the system, you have to go through the system, and I’m not willing to put myself through that,” Miller said.

He’d rather wait it out and see if he can make it on his own.

There was a time when a stranger offered Miller a job that sounded promising. They made plans to discuss further details the next day.

But Miller didn’t have a cellphone. He waited for his stranger the next day at his usual spot, but the police asked him to move. He never came across the man again.

Among the homeless population that is sleeping in streets, there is a lack of awareness and understanding of the available resources.

DHS actually has five Drop-in Centers throughout the city for people like Miller, who are chronically homeless but refuse to stay in a shelter.

The problem lies in the fact that there isn’t an efficient way to disseminate information and resources to the homeless on the street. They have to tell people, one by one.

Twenty-four hours a day, DHS has people walking around the city to engage with homeless people, tell them about their options, establish relationships, and encourage them to get off the streets.

New Yorkers can notify DHS of the address where a homeless person is resting, and someone from DHS will reach out to them within two hours.

On the 311 app that assists New Yorkers access city services, New Yorkers can notify DHS of the address where a homeless person is resting, and someone from DHS will reach out to them within two hours.

From a homeless person’s perspective, it is easy to conclude that the refusal of a traditional shelter means refusal of all benefits from the government.

“There is that misconception,” said Lindsey Davis, director of crisis services for nonprofit Coalition for the Homeless. “There are a range of services that have been in place for many years. They may have had a bad experience at one, say a traditional shelter, so they disregard other options.”

According to DHS, there were around 3,182 individuals living on the streets as of February—a slight decrease from the 3,357 people counted in January 2014.

It’s also a difficult adjustment for the homeless.

“Entering a drop-in-center can be a very difficult process,” Davis said. “Some drop-in-centers require you to show up every night to get a bed.”

It can be difficult for a homeless person to suddenly follow strict rules, especially since they have been living by themselves for some time.

Many don’t meet curfew or return to the same shelter every night. This breaking of rules can cause them to lose their spot in the shelter and their benefits.

DHS offers alternative options such as safe havens, which are smaller shelters that are less strict on rules. But there isn’t enough of them.

“We need to expand the programs,” Davis said.

‘I’m Going to Try Until I Die’

William Metzger, a 56-year-old homeless man, is waiting it out on the street to see if he can get a construction job on his own. He feared he’d meet drug addicts at shelters and he’d fall into bad habits.

When Metzger was a child he wanted to be a professional pianist; he attended college on a baseball scholarship. But he became addicted to drugs, and in time his habit caused him to spiral off course.

He ended up going to prison for attempted armed robbery and possession of cocaine.

Metzger said he has been homeless for two years and clean for three.

During his time as a vagabond, he has walked from 28th Street to 125th Street, stopping at each construction site he saw to see if they were hiring. Metzger said they told him they were only hiring union workers. He is currently looking into the prospects of joining a union.

Not All the Homeless Are Without a Home

Then there was Debbie, 39, who had a different reason for sleeping on the street.

Debbie said she suffers from depression, bipolar disorder, ADHD, and PTSD from her years of sexual abuse in her foster home.

Debbie chose to be homeless in the name of love.

“To this day, my [foster] mother still sleeps in the same bed as that man,” she said, and began to cry. She stopped to wipe her tears with a Huggies wet wipe.

Not all the people sleeping on the streets are homeless. Technically, some have a home. But they don’t live in their homes due to complications such as mental illness.

Debbie, who declined to give her last name for fear of embarrassing her family, has a safe home with her biological sister in Texas.

But Debbie chose to be homeless in the name of love. And she made this decision in the course of one night.

It all began on an evening in the Port Authority two years ago, when she could not bring herself to get on a Boston-bound bus.

She had bought the bus ticket as an attempt to reconnect with an abusive ex. But, as disturbing memories resurfaced, she stood there and watched the bus drive away.

That same night at the Port Authority, she met the man who would become her husband.

They talked and connected. He told her that he thought they were meant to be together, she recalled.

“This man loves me with all his heart,” she said. “So I followed him.”

She did not care that he was homeless at the time (or currently in prison for that matter).

So Debbie begs for donations in the street and saves for their eventual bus tickets to Texas.

It is not clear when her husband will get out of prison. As the frost from the long winter is replaced by scorching heat, she continues to sleep on the street, waiting.