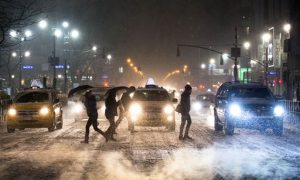 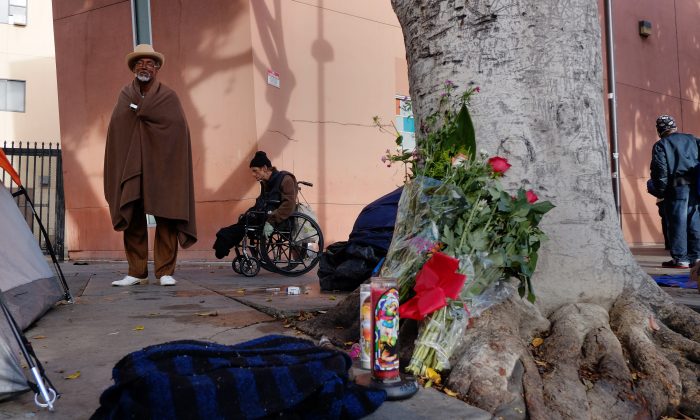 Ceola Waddell, 58, left, a homeless man who says he witnessed the police shooting on Skid Row on Sunday, stands by a makeshift memorial for the victim in downtown Los Angeles on Monday, March 2, 2015. (AP Photo/Richard Vogel)
Crime and Incidents

A violent confrontation between Los Angeles police and a homeless man Sunday—caught on video by a bystander—is the latest police shooting that has captured the nation’s attention.

In the video, which has already garnered more than 5 million views at the time of writing, four officers are seen wrestling with a man on the ground. Seconds later, gun shots are heard and the man on the ground goes limp.

The officers were initially responding to a robbery call on San Pedro Street around noon Sunday, according to a Los Angeles Times report.

The Los Angeles Police Department (LAPD) said at a Monday press conference that an altercation ensued when officers tried to look inside the man’s tent.

During the confrontation, the man (still unidentified) tried to grab one of the officer’s gun. Two officers and a sergeant then fired their weapons at him.

Police Chief Charlie Beck said Monday that the officers were part of the Safer Cities Initiative in Skid Row, a crime-fighting strategy that cracks down on nuisance crimes in an effort to deter more serious crimes from occurring. All involved officers were specially trained to deal with the homeless and mentally ill population.

The neighborhood where the shooting occurred, known as Skid Row in downtown Los Angeles, has one of the country’s highest concentrations of homeless.

Since the late 1800s, the area has drawn large numbers of the itinerant because it was the last stop on the transcontinental railroad, according to the website of Union Rescue Mission, a local nonprofit that provides social services to Skid Row’s homeless, established in 1891.

Today, there are roughly 8,000 to 11,000 people residing in the 0.4-square-mile neighborhood, 2,500 of whom are homeless, according to estimates by the Los Angeles Area Chamber of Commerce. Another 2,000 to 2,500 live in shelters, mission beds, or transitional housing, and the remaining 6,000 residents live permanently in hotels.

Conditions there are so dire that Los Angeles Times columnist Steve Lopez once wrote that the neighborhood was “a rock-bottom depository and national embarrassment. A place where disease, abuse, crime, and hard-luck misery are on public display and have been for years, conveniently out of sight and mind for most Angelenos.”

For years, hospitals also frequently dropped off homeless patients at the location against their will. In 2006, the city’s prosecutors investigated and brought criminal charges against 10 local hospitals for releasing patients to Skid Row without regard to their safety.

As recently as last August, city prosecutor Mike Feuer filed a lawsuit against a local medical center for continuing to dump mentally ill and disabled patients in the neighborhood.

Police Treatment of the Homeless

The police have a long history with the homeless population in Skid Row.

When William Bratton—the current New York Police Department commissioner famed for his championing of “broken windows” policing—took over the Los Angeles Police Department in 2002, he vowed to clean up the neighborhood and crack down on nuisance crimes.

The city’s law code forbade people from sitting, lying, or sleeping on the sidewalk. Violators could be punished up to $1,000 in fines or up to six months in jail.

In 2003, the American Civil Liberties Union filed a lawsuit against the city of Los Angeles, alleging that the city was criminalizing people for their homeless status. They represented several homeless individuals who said police routinely ticketed or arrested them, and threw out their belongings.

“The Eighth Amendment prohibits the City from punishing involuntary sitting, lying, or sleeping on public sidewalks that is an unavoidable consequence of being human and homeless without shelter in the city of Los Angeles,” Judge Kim M. Wardlaw wrote in her decision.

The LAPD has yet to disclose whether the man shot on Sunday had a history of mental illness, but it is no secret that officers still struggle with how to interact with the homeless population in Skid Row.

Officer Deon Joseph, a 16-year Skid Row patrol officer, told the Los Angeles Times on Sunday: “We have to deal with the aftermath of a system that’s failed.”