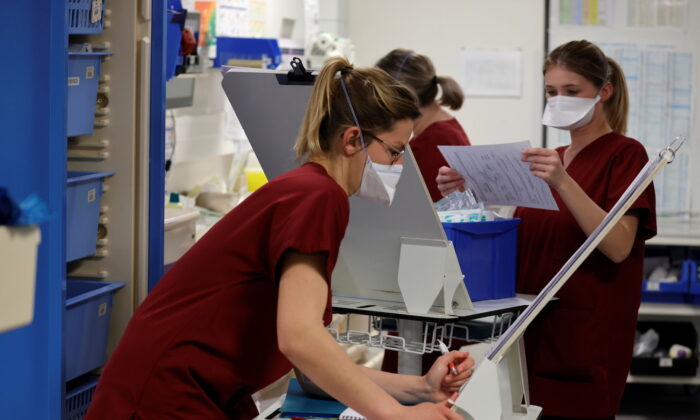 Thousands of Health Employees Laid Off in France Over Vaccine Mandate

About 3,000 French nationals working in the medical and care sector have been suspended from work for deciding not to get vaccinated against the CCP virus before a government-imposed deadline, France’s Minister of Health announced on Sept. 16.

“Yesterday, some 3,000 suspensions were served on staff in health and social care facilities who had not yet entered into a vaccination course,” Olivier Veran told French RTL radio, originally in French.

“Most of the suspensions are only temporary. … Many of them have decided to get vaccinated as they see that the vaccination mandate is a reality.”

According to local daily Nice Matin, nearly 450 health workers have been suspended in a hospital in the city of Nice, in southern France.

The French government reported on Sept. 7 that around 84 percent of staff in care homes and health care establishments had received two vaccine shots, meaning about a total of 300,000 care employees remain unvaccinated.

Employees not vaccinated could get laid off from their jobs or have their pay suspended, authorities said as they announced the new mandate earlier this year, although a top court in France has forbidden employers from firing staff in the medical and care sector.

Health care workers who have received only one dose of a vaccine will have to take a CCP virus test every three days until they’ve completed their second dose—Oct. 15 is the deadline for both vaccines to be administered.

Firms and employers are subjected to penalties if they fail to comply with Macron’s order and receive fines of $160 (135 euros) that can climb up to $4,430 (3,750 euros) after being fined three times in one month, Les Dernières Nouvelles d’Alsace reported. The penalties can also be accompanied by six months in prison.

Some hospitals have previously expressed concerns that mass lay-offs would result in staff shortages.

Emmanuel Chignon managed to keep his nursing care home in western France running through the worst of the CCP virus pandemic, but now he is confronting a new crisis: staff who would rather quit than comply with a government mandate that they get vaccinated.

“We feel like we’re living through a third wave, but this time it’s a human resources wave,” Chignon said on Sept. 14 at the nursing home he runs in Bordeaux, southwest of Paris.

Vanessa Perotti, a health care worker at Hopital Beaujon in Clichy, a working-class Paris suburb, is also among the workers who decided not to get vaccinated and instead quit her job in the medical field.

Thierry Paysant, a fire safety officer with the public hospital system in Nice, took another approach and pitched a tent in front of the city’s Saint-Pons abbey, and erected a placard reading “Hunger Strike” in large red letters.

“We will go as far as we are able to go,” Paysant said outside the abbey, where he had also set up a camping stove.

He added that he wasn’t against the vaccination itself, but objects to people being forced to get the shot or risk losing their jobs.

“It’s hard to swallow,” he said. “It was imposed in a violent way.”