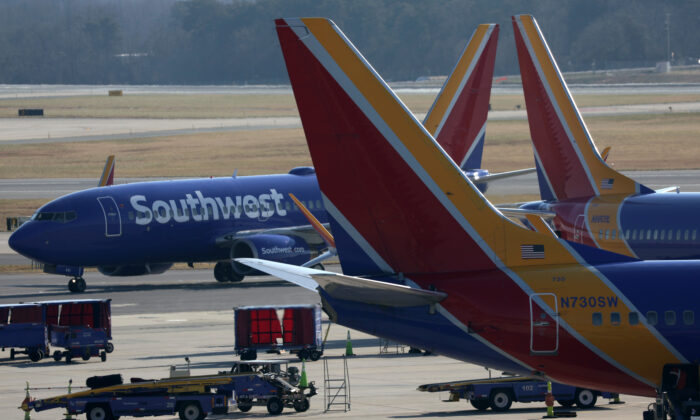 Thousands of Flights Canceled as Airlines Struggle With Staffing

Thousands of flights were canceled on Wednesday as airlines struggle with inclement weather and getting enough workers to work over the holidays.

Over 2,700 flights were canceled worldwide, including nearly 1,000 that had been set to operate into, within, or out of the United States, according to FlightAware, a flight tracking service.

Over 10,000 other flights were delayed, nearly half of which were linked to America.

“The nationwide spike in Omicron cases has had a direct impact on our flight crews and the people who run our operation. As a result, we’ve unfortunately had to cancel some flights and are notifying impacted customers in advance of them coming to the airport. We’re sorry for the disruption and are working hard to rebook as many people as possible and get them on their way during the holidays,” a United Airlines spokesperson told The Epoch Times in an email.

A Delta Air Lines spokesperson also offered an apology and said the company is working to reroute aircraft and crews in an attempt to cut down on cancellations and delays.

“We are experiencing some delays due to weather conditions in various parts of the country,” a Southwest Airlines spokesperson added.

Alaska Airlines said winter weather displaced both plans and staffers. That issue, combined with the Omicron variant affecting an unspecified number of workers, “are converging to cause more canceled and delayed flights for Alaska Airlines this week,” the company said in a statement.

All flyers booked to fly before Jan. 2, 2022, were encouraged to shift their travel to a later date.

Airlines started canceling or delaying many flights before Christmas, with thousands axed or put off until later on Christmas weekend.

Bob Mann, an airline consultant with R.W. Mann & Company, told The Epoch Times in an email that airlines schedule crews on a monthly basis, and weather and flight delays cause airlines to “effectively use up crew and reserve coverage at a higher rate, earlier in the month, leaving less available at month end.”

Holiday periods usually have a higher rate of sick calls and fewer workers willing, or able, to work beyond their scheduled hours, according to Mann.

“A highly transmissible COVID variant with a changing CDC self-quarantine policy adds a new variable to the flight, terminal, and ramp staffing availability equation. I suspect that at least a few carriers did not consider that seriously enough,” Mann said. “Bottom line: what we see is some airlines having run out of crew resource options. Some of these delays and cancellations will resolve over the New Year’s weekend.”