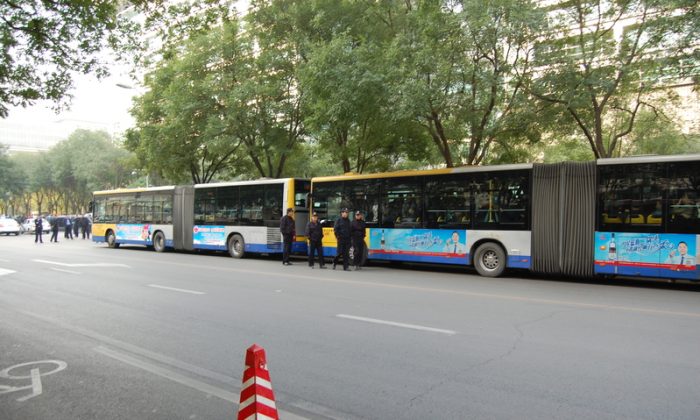 Police buses wait at a Beijing protest on Oct. 21 outside one of China's four major banks. Thousands of laid-off workers at ICBC bank headquarters petitioned banks to rehire them and address inadequate pensions. Protesters were rounded up and taken to a black jail in Beijing. (Courtesy of subjects)
China

Thousands of former employees from China’s four major banks petitioned in Beijing on Oct. 21, asking the banks to reinstate their lost jobs and provide to adequate pensions.

The protest at Beijing headquarters of state-owned Industrial and Commercial Bank of China (ICBC) was met with a substantial security and police force.

“We tried to enter site at around 7:30 this morning but the authorities were prepared, with policemen and police cars surrounding the bank,” said Wu Lijuan, a laid-off worker from Hubei Province, in a tearful telephone interview with an Epoch Times reporter.

“There were over 20 big buses and over a thousand policemen, plain-clothes men and security guards waiting for us. Before we even had a chance to assemble, the police rushed in and dragged people on to buses and took them to Jiujingzhuang,” Wu said, referring to a large black jail in Beijing used for extralegal detentions. “We haven’t been able to contact anyone who was taken away,” she said.

Wu Lijuan continued: “We had close to ten thousand protesters. We protested in Zhongnanhai [the central headquarters for the Communist Party and the central government] but security was tight there. The authorities were afraid of protests so security was reinforced at Tiananmen Square too.”

She estimated that among the petitioners taken to Jiujingzhuang in the morning, about 2,000 were ex-ICBC employees, about 1,000 were employed by China Construction Bank and about 1,000 worked for the Agricultural Bank of China.

Cell phone communication to Jiujingzhuang was shut off until late afternoon.

This is not the first protest from laid-off bank staff. Over 3,000 petitioners gathered in July in Beijing, many of them age 40 and upwards, protesting layoffs and inadequate severance packages, but they did not feel that their grievances were addressed.

Chinese banks let go over 600,000 employees in downsizing operations this decade. Fired staffers complain that the banks did not follow legal guidelines, leaving many older people in dire conditions.

Another laid-off worker, Liu Yanxiang said they would continue to maintain pressure on the banks to address their legal rights and provide adequate pensions. He believes that recent heavy handed response will only further intensify conflict.

“The majority of former employees are living in troubled financial conditions. We are old, have no income and no health insurance,” Liu continued. “Many of us are unhappy with the situation and our petitions to the authorities have been ignored. That makes the conflict between us even worse. At the moment, the bank leadership doesn’t want to talk to us or meet with us. They have ignored our needs over the years, so we are in a desperate situation,” he said.

There are secret documents showing the illegality in the four major banks’ lay off processes, Liu said. Allegedly, the bank headquarters issued instructions for the branch banks to downsize, providing incentives for the branch managers of 50,000 yuan for each laid off employee. He said they ignored official policy for layoffs and terminated workers with no legal basis.