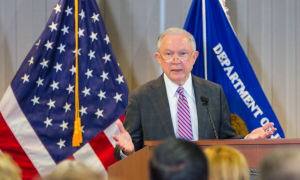 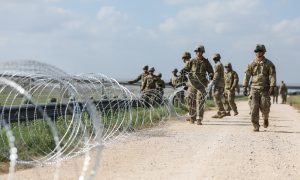 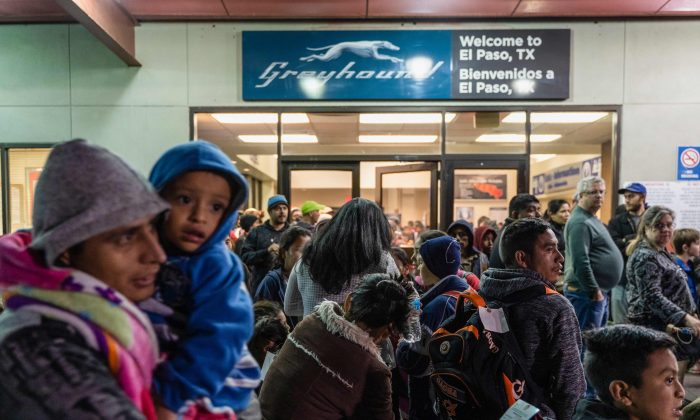 Asylum-seekers wait at a Greyhound bus station in El Paso, Texas, after being dropped off by Immigration and Customs Enforcement, on Dec. 23, 2018. (PAUL RATJE/AFP/Getty Images)
US News

WASHINGTON—As family units pour into the United States, immigration authorities are being forced to release thousands of them into the country within days, as detention space is overwhelmed.

In the past two months, Border Patrol has apprehended more than 102,000 family units and unaccompanied minors along the Southwest border.

In Yuma, Arizona, Sheriff Leon Wilmot said that since September, the Border Patrol has been apprehending anywhere between 116 to 200 illegal aliens daily.

“Basically what’s happening now, is they’re being processed through Border Patrol here and then they’re bused to Pima County and Maricopa County—to get on buses to get to their final destinations,” Wilmot said. “And that’s usually in the Carolinas—either North or South Carolina—or they’re going to Florida, or they’re going to San Diego.”

“They’re going to other places within the interior of the United States, which is having an impact on those sheriffs and those communities, because they don’t have the adequate resources to be able to handle that.”

Even Greyhound is struggling to keep up. Wilmot said a local NGO rented an entire motel for the family units that had been released but had to wait in Yuma for a bus to become available.

The family units coming into the United States are almost all from Central America. Most cross the border illegally, then turn themselves in to Border Patrol agents and claim asylum.

Under the 1997 Clinton-era Flores Settlement Agreement, unaccompanied children aren’t supposed to be held in detention longer than 20 days. A 2015 ruling on Flores by a California District judge widened the 20-day limit to apply to children who are accompanied by adults.

A case in which the asylum-seeker is detained takes at least 45 days to adjudicate, which leaves the Department of Homeland Security one option—to release the family into the interior to await their court date. This practice is known as “catch-and-release.”

Once released, more than one-quarter of those who are tracked with ankle bracelets abscond, Matthew Albence, executive associate director of ICE Enforcement and Removal Operations, said in Senate hearing testimony on Sept. 9. Additionally, 40 percent fail to fill out a formal asylum application and a further 31 percent fail to appear at their court hearing.

In June, President Donald Trump directed the Attorney General to move for a modified Flores arrangement that would allow for the detention of family units together until their immigration case has been determined. A district judge denied the lawsuit and the Department of Justice hasn’t yet appealed.

“There is no doubt that due to lack of action from our congressional leadership, the word will travel to foreign countries regarding our nation’s current situation,” the statement said. “This will only result in an escalation of family units taking advantage of this crisis.

“Communities do not have the financial resources nor the infrastructure to handle this additional burden, which will ultimately lead to other ancillary issues. Among these issues are potential increases in crime, victimization of undocumented immigrants, exploitation of young children, and human-rights concerns.”

In a potential tide-turning solution, Department of Homeland Security Secretary Kirstjen Nielsen said Dec. 20 that asylum-seekers will be subject to remain in Mexico until their immigration case is complete.

However, no further details have been released and the policy hasn’t yet been enacted.

Wilmot and other sheriffs are fed up with the lack of action in Congress.

“It’s actually a failure of our lawmakers back in Washington, D.C., because I mean they have had testimony upon testimony about what our federal partners need to be able to adequately do their job,” he said. “And yet, they have done nothing.”

Wilmot said if Congress doesn’t step up to fix the loopholes and fund border security, “all they’re doing is continuing to collaborate and further help fund these cartels that are on the other side of the border.”

The Yuma Sector Border Patrol didn’t respond to requests for comment before deadline.