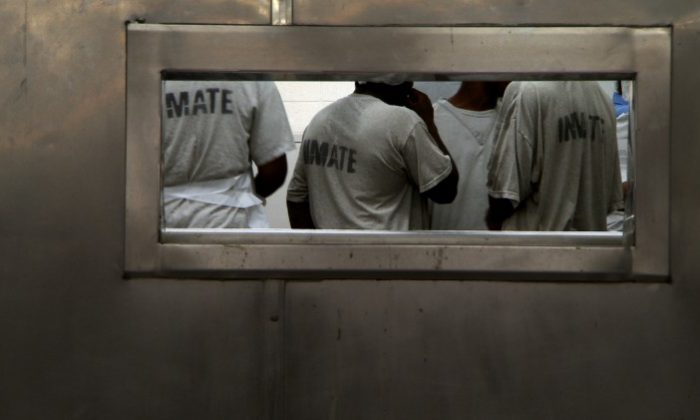 WASHINGTON—Drug criminals once described by prosecutors as unrepentant repeat offenders are among those poised to benefit from new sentencing guidelines that are shrinking punishments for thousands of federal prisoners, according to an Associated Press review of court records.

Many defendants cleared for early release starting this fall fit a more sympathetic profile: small-time dealers targeted by a draconian approach to drug enforcement. But an AP analysis of roughly 100 court cases also identified defendants who carried semi-automatic weapons, had past convictions for crimes including robbery and assault, moved cocaine shipments across states and participated in international heroin smuggling.

One inmate whose punishment was cut was described in 2012 as a “calamity waiting to happen.” Another was caught with crack and guns while awaiting sentencing in a separate drug case.

Supporters of lighter drug sentences say there’s no evidence that lengthier sentences protect public safety, and there’s bipartisan determination to cut spending on a bloated federal prison system. Nonetheless, the broad spectrum of defendants granted early release, including some who prosecutors just a few years ago branded community dangers and raised dire warnings about, underscores the complex — occasionally risky — decisions confronting the government as it updates a drug sentencing structure many see as overly harsh and expensive.

“I’m a career prosecutor. I’m a law-and-order girl, and I believe that you need to send dangerous people to prison for a very long time,” said Deputy Attorney General Sally Yates.

“But,” she added, “I think that we need to be smart about deciding who are those dangerous people.”

Guidelines set by the U.S. Sentencing Commission provide judges recommended minimum and maximum terms for federal crimes. The independent commission voted last year to reduce ranges for drug offenses, then applied those changes to already-imprisoned convicts. Since then, prisoners have sought relief from judges, who can reject those they consider public safety concerns. About three-quarters of requests had been granted as of August.

The first wave, some 6,000, is due around Nov. 1, with most released from halfway houses or home confinement. Others will be released to immigration authorities for deportation. Federal officials say roughly 40,000 prisoners will be eligible for reductions in coming years.

Though the commission has repeatedly amended the guidelines, including narrowing the disparity between crack and powder cocaine sentences that resulted in disproportionately long penalties for blacks, the latest revision is its most sweeping because it covers all drug types.

“Nothing to date comes close to what this shift is likely to produce over the next decade or so, starting this year,” said Marc Mauer of the Sentencing Project, an advocacy group.

The action is part of a national effort to rethink punishments for a drug offender population that comprises roughly half the federal inmate count. In addition to an Obama administration clemency initiative and directives against mandatory minimum sentences, new bipartisan legislation aimed at reducing spending on a prison system that sucks up nearly one-third of the Justice Department budget would give judges greater sentencing discretion and ease penalties for nonviolent criminals.

Supporters call the commission’s move a modest dialing-back of punishments that were too harsh to begin with and wouldn’t be imposed today. The new policy on average would pare two years from sentences and in many cases just months. They say the beneficiaries would be coming out of prison soon anyway, and cite studies showing inmates released early aren’t more likely to commit new offenses than those who serve their entire sentence.

“There is a strong research consensus at this point that longer lengths of stay cost taxpayers a tremendous amount but don’t add any additional crime-control value,” said Adam Gelb, a Pew Charitable Trusts criminal justice expert.

But absent foolproof formulas, judges are grappling with balancing cost against public safety.

A Washington, D.C., judge recently rejected bids from two organizers of a once-thriving 1980s-era cocaine trafficking operation. Though both were sentenced in 1990, the judge declared them to be continuing threats and chastised prosecutors for appearing to dismiss the pair’s involvement in violent and calculating crime.

The one-time D.C. drug dealer whose sentence was already cut under crack guideline changes had another month taken off and is due out in 2016.

Prosecutors in 2008 said Best helped run a drug-dealing organization, shot at someone he believed had stolen from him and, after fleeing, was found in a stolen car with an assault rifle. His lawyer described him as the product of a troubled, impoverished upbringing. Best, in an interview from prison, called himself a loving father who bears no resemblance to his past self.

“It’s been a long time coming. Eight years is a long time,” he said. “I came in one way. I’m coming out another.”

Others with shortened sentences are defendants prosecutors said had squandered repeated opportunities.

Regis Payne is due out in 2017 after his 82-month sentence for selling PCP in D.C. was cut to 60 months. Before his 2012 sentencing, prosecutors called him a “calamity waiting to happen” with a “horrendous” record, undeterred by past convictions and arrests. Roscoe Minns was cleared for release in November, though prosecutors in 2012 highlighted prior assault and theft convictions in pursuing stiff punishment.

Whole Foods to Stop Selling Products Made by Inmates

Even for a prison system that annually releases tens of thousands, the change has required significant preparation. The commission, addressing public safety concerns, delayed implementation by a year to allow time to weed out inappropriate candidates and so those eligible this fall could be moved to halfway houses.

Though some released early will reoffend, the majority, statistically speaking, will not, said Ohio State law professor Doug Berman.

“Mark my words: The sky will not fall,” added Julie Stewart of Families Against Mandatory Minimums.

Tuan Evans, who trafficked in pistols and sold cocaine to undercover officers, had nine months shaved off his 107-month sentence. He wrote from prison that he’s acquired haircutting skills and hopes to start a landscaping business, and mentor children, once he’s freed. Records show a 2018 release date.

“You don’t have to lock us up and throw away the key when we make a mistake,” he said.