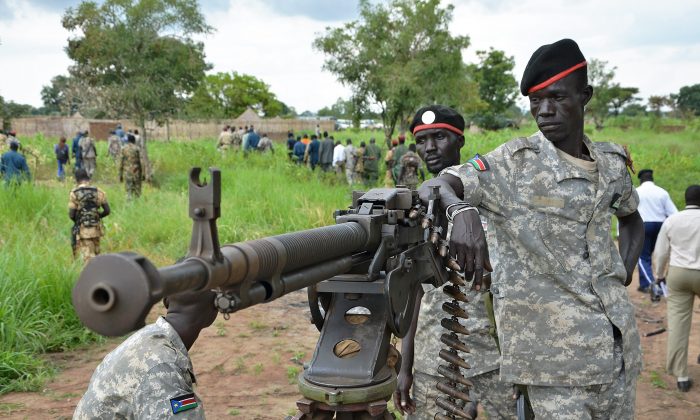 South Sudanese SPLA soldiers are pictured in Pageri in Eastern Equatoria state on Aug. 20, 2015. The spokesman of SPLA, Colonel Philip Aguer, visited the area after the government claimed to be back in control of the area following an attack by rebel forces. South Sudan's civil war began in December 2013 when Kiir accused his former deputy Riek Machar of plotting a coup, setting off a cycle of retaliatory killings that has split the poverty-stricken country along ethnic lines. The government says they will return to talks in Ethiopia in early September to "finalise" a peace deal. (Samir Bol/AFP/Getty Images)
Africa

JUBA, South Sudan—The United Nations refugee agency says a rise in fighting in a once-peaceful part of South Sudan has forced tens of thousands of civilians to flee their homes since December.

Rocco Nuri, a spokesman for the agency, said Saturday that 23,000 civilians have fled their homes in South Sudan’s Western Equatoria state, including 8,000 people who have left for neighboring countries.

Many are hiding in forests are beyond reach of aid groups, he added.

Rafael Patrick Zamoi, the governor of Western Equatoria, said the government aims to make peace with insurgents but will crack down on those causing instability.