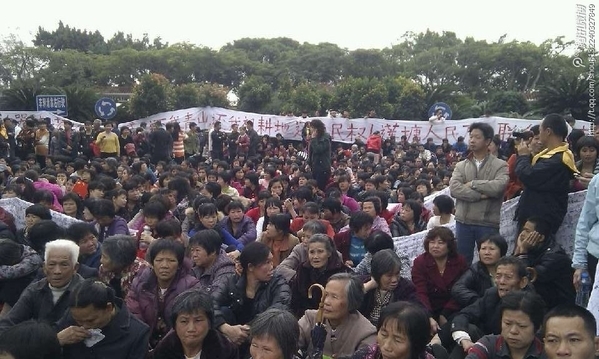 Thousands of villagers of protest at local government on Dec 3, in Shantou, Guangdong. (Provided by villigers)
Social Issues

Thousands of villagers protested in front of a government building in southern China in a last-ditch effort to get back farmland taken by Chinese Communist Party officials, who gave them no compensation.

The villagers-turned-demonstrators amassed in front of the municipal government building in Liantang, located in Guangdong Province’s Shantou City, saying that the land confiscation was illegal.

“Yesterday (Dec. 3) about 4,000 to 5,000 people went to protest. They demanded to see the city Party secretary for a response of the loss of their farmland,” Local villager Ms. Lin told The Epoch Times. “They held white banners that read ‘Return Our Farmland. Give Us Back Our Civil Rights.’ Up until 2 p.m., no one came out to meet them.”

Police and gangs of thugs hired by the government attacked villagers who were attempting to take photos or videos of the incident.

Students from the Department of Journalism and Communication at Shantou University were chased off while interviewing protesters. More than 1,000 villagers rushed to their aid, but were in turn attacked by police.

One student posted a photo online of a 90-year-old man lying on the ground getting beaten by police. The student commented that a policeman threatened him, saying: “If you keep protecting the student reporters, I’ll run you over with my car.”

The student added, “Under the protection of the villagers, we transferred to another car, returning to school safe and sound with our equipment.”

When the bus service was suspended from Liantang to Shantou, where the protest took place, “villagers with cars had to come back to give the others a ride,” said Mr. Lin, another villager. He added that protests resumed later while more demonstrators appeared in front of the city government office.

While protesters shouted slogans call for the return of their land, elderly villagers got down on their knees in despair. Later, a secretary from the local Political and Legislative Affairs Committee walked out, telling the crowd that the matter would be investigated and a report would be provided in two months.

Ms. Lin said, “There were several college students and elderly villagers in our car, and we were intercepted by the police and thugs on our way back to the village. They were in two private cars and a car with a city government plate number. They rammed our car, injuring some of the senior villagers. The college students were ordered to delete their photos.”

On Nov. 28, during another large-scale protest, villagers offered a petition, signed by 10,000 locals, against local government officials who sold their farmland without consent. Finally, a government representative promised to investigate and report the result on Friday, Nov. 30. But no news was provided.

In China, local officials have confiscated and sold off tracts of land or homes belonging to people without their consent in an attempt to deal with local governments’ budget shortfalls. Most of the time, little to no compensation is offered and there have been at least nine incidents recently where people have lost their lives protesting against land-grabs or home demolitions, according to Amnesty International.

It is estimated that village officials in Liantang, a village with around 30,000 people, have privately sold farmland worth around 1 billion yuan (US$160 million). Locals have said that not a single penny has been paid as compensation to the villagers.

Over the last few years, tens of thousands of hectares of land in Liantang have been sold cheaply to commercial enterprises by the local government for profit. The land sold includes farmland, forests, and even beaches.

In the latest land sale, about 133 hectares (328 acres) of farmland were sold to build a distribution and logistic center.

The local government dodged responsibility by saying it was in debt by more than 10 million yuan ($1.6 million). The response triggered the recent mass protests.