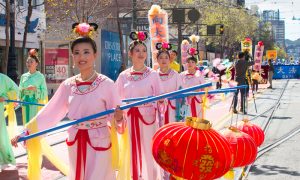 Thousands of Chinese Sign Petition to Release Prisoners of Conscience

Practitioners of the Falun Gong spiritual discipline remain persistent in their nonviolent resistance efforts while facing persecution by the Chinese regime. And they aren’t alone.

Last August, 42 Falun Gong practitioners were swiftly and illegally arrested by over a dozen officers from the local police when gathering in the city of Cangzhou, Hebei Province. In the days that followed, authorities raided the detained practitioners’ homes. While most of the practitioners were released in the next few weeks, 9 remain in custody.

Minghui.org is a website run by overseas Falun Gong practitioners that documents the persecution. Hebei practitioners started a petition calling for the release of the remaining 9 prisoners, according to an April 14 Minghui report.

At present, 2,403 people have signed the petition, including almost 2,200 who, in traditional Chinese fashion, left their fingerprints in red ink.

The 9 detained practitioners hired seven attorneys to defend them at the local procuratorate in Yunhe County, but so far their efforts have not been successful.

Freedom of expression and belief are enshrined in the Chinese constitution, making persecution of Falun Gong practitioners an illegal policy. The Communist Party uses an extra-legal agency, known as the 610 Office, to coordinate and carry out the repression.

But not all in the Chinese state are as enthusiastic as the regime would like.

In one instance, a policeman approached a Falun Gong practitioner canvassing for signatures. Rather than detaining the practitioner, he signed the petition and left in silence.