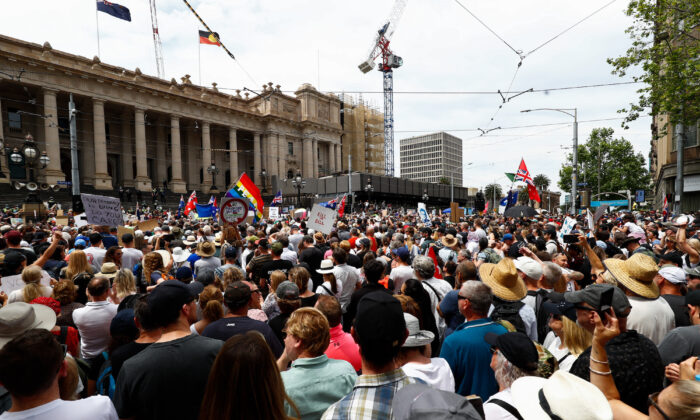 Members of the 'Vic Freedom Movement' group participate in a protest in Melbourne, Australia, on Nov. 6, 2021. (AAP Image/Con Chronis)
Australia

The protesters began to gather around midday, with some chanting “kill the bill,” and with many holding signs expressing their views.

Some of the signs read: “Save our children,” and “Vaxtoria.”

A woman addressed the crowd just after 2 p.m., saying the proposed Andrews government bill was “unlawful” and “needs to be invalidated.”

The protesters pledged to return to hold a similar protest next weekend and march across the city to the governor’s residence.

Victorians have endured some of the longest lockdowns in the world, along with harsh restrictions.

Civic pushback against those restrictions has been met with martial force, erupting in September into days of protests and unrests that saw police officers fire non-lethal rounds at protesters.

The Public Health and Wellbeing (Pandemic Management Bill 2021) is being hurried through parliament and has passed through the lower house.

The laws would give the state premier unprecedented power to declare a pandemic and extend any declared state of emergency for three months.

The current emergency conditions are due to expire in December. Typically, they run for three months and have been extended every three months since first being declared in March 2020.

Traditionally, this power has sat with the chief health officer, but the new bill would hand it over to the premier.

The legislation will require the backing of three out of 11 cross-benchers to pass through the upper house.

The move comes as the state—and the nation—has reached 80 percent vaccination coverage, and has thereby began to lift pandemic restrictions for the fully vaccinated while leaving restrictions in place for the unvaccinated.

About 82 percent of people aged over 12 are fully vaccinated in Victoria.