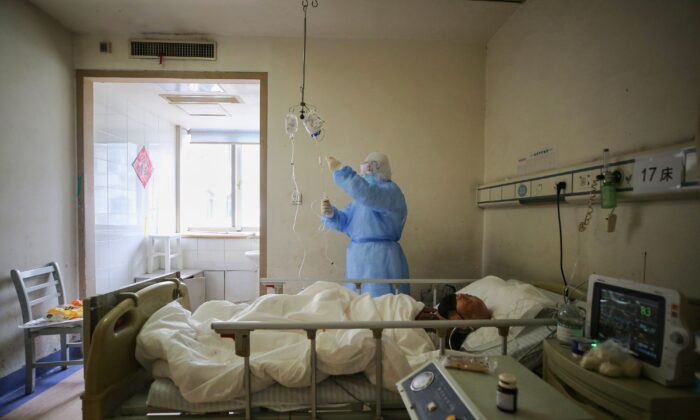 A medical staff member checks medicine used on a patient with COVID-19 at Red Cross Hospital in Wuhan, Hubei province, China, on March 11, 2020.(STR/AFP via Getty Images)
By Cathy He

Thousands of ash urns have been delivered to a funeral home in the virus epicenter Wuhan in recent days, as relatives start picking up the remains of loved ones, further calling into question the true scale of the outbreak in China.

Families of those who died of the CCP virus were permitted to collect their relatives’ cremated remains from seven government-run funeral homes with crematoriums, beginning on March 23. Since then, photos of long lines outside a funeral parlor have circulated on Chinese social media—and promptly deleted by the regime’s censors.

At one of those facilities, the Hankou Funeral Home, trucks delivered about 2,500 urns on both Wednesday and Thursday, Chinese financial magazine Caixin reported. One picture published by the outlet showed 3,500 urns being stacked by employees inside the facility.

Some families told Caixin they had to wait in line for up to five hours to pick up the ashes.

Hankou Funeral Home said it would endeavor to release 500 ash urns a day, according to Chinese news aggregator Toutiao. The funeral parlor hopes to complete the task by Tomb-sweeping Day on April 4, a traditional Chinese festival when people visit the graves of their ancestors.

When Caixin contacted funeral homes in Wuhan, staff at six of the facilities answered the phone, either saying they did not have information on how many urns were to be collected, or that they were not permitted to disclose the numbers.

Officially, Chinese authorities have reported over 2,000 deaths in Wuhan, where the virus first emerged. However, experts and locals have long been skeptical of China’s official figures, in light of Beijing’s initial coverup of the outbreak; Wuhan’s overstretched health system, which meant that many people had been unable to receive testing and treatment; and several changes to the way infections were officially counted.

Officials at other funeral homes in the city also described sharp upticks in bodies the facilities received for cremation. An employee at the Caidian Funeral Home located in a Wuhan suburb also The Epoch Times at the time that they needed at least 100 body bags every day.

Mr. Ding, a Wuhan resident who lost his mother to the virus, has yet to collect her remains. He told the Chinese-language edition of The Epoch Times that his local district authorities said they would help families with doing paperwork; getting processing fees and cost of ash urns waived; and receiving discounts for burial plots, provided the tasks are completed before Tomb-sweeping day. After this date, such assistance could not be guaranteed.

He criticized authorities for forcing families to sort out the burials within such a short time frame, especially given that no funeral ceremony or rites are permitted. “How can I accept this?” Ding said.

He said the only consolation for families would be for officials to acknowledge the truth of what happened and accept responsibility.

If authorities could “acknowledge fault and accept responsibility,” then this would be “the greatest consolation for families of the deceased, and amount to paying respect to the dead,” Ding said.