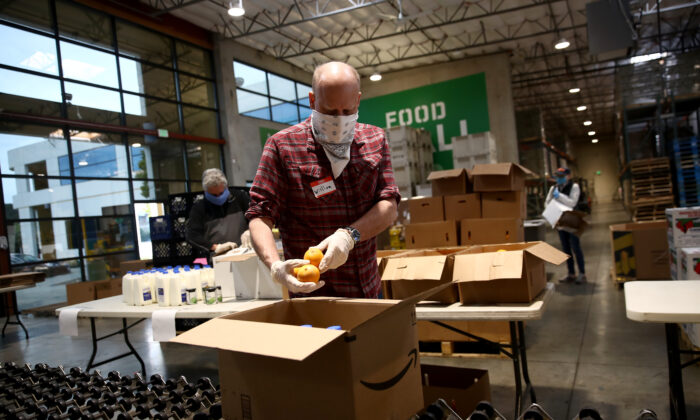 Thousands of Americans Turn to Food Banks Amid Mass Unemployment

Thousands of people across the United States are flocking to food banks as skyrocketing unemployment levels due to the CCP virus have left families struggling to put food on the table.

A record 22 million Americans have filed for unemployment insurance since President Donald Trump declared a national emergency in March and numerous businesses deemed nonessential were forced to shut down in an attempt to curb the spread of the virus.

Following a wave of mass layoffs and furloughs, food banks across the country have been struggling to keep up with unprecedented demand as thousands of people line up, sometimes for hours, to collect groceries from drive-through pantries.

Feeding America, the country’s largest food-relief organization which oversees a network of 200 food banks and 60,000 food pantries, said nearly 100 percent of food banks in its network are serving more neighbors in need during the pandemic, yet nearly 60 percent are facing reduced inventory levels amid rising demand.

“This year, the COVID-19 crisis is driving more of our neighbors into food insecurity and putting a strain on food banks to provide more meals,” Feeding America CEO Claire Babineaux-Fontenot said in a statement last week. “Never has the charitable food system faced such tremendous challenge, and we need all the resources we can get to help our neighbors during this terrible time.”

In New York, the state hardest hit by the virus, Food Bank for New York City—the biggest anti-hunger organization in the city—said the number of people turning to its emergency food network has increased by 50 percent.

“In Richmond Hills, Queens, at the River Fund, we had an agency serving 1,000 to 1,500 people before COVID,” Leslie Gordon, Food Bank’s President and Chief Executive, told the New York Post. “It’s now going up to 5,000 people in line and that could continue to grow. This is not unique. It’s a bellwether for what is happening across New York City.”

Other states across the country are also seeing a surge in the number of people turning to food banks during this uncertain time. On April 14, nearly 1,000 cars lined up at a distribution center set up in Pennsylvania by the Greater Pittsburgh Community Food Bank. Demand for its bags of food soared nearly 40 percent in March.

In Washington, Capital Area Food Bank has seen the amount of people coming in for food at their nonprofit partners soar from 30 percent to 400 percent amid the pandemic, while calls to its Hunger Lifeline, which people can call to receive free food, have tripled over the last few weeks.

A spokesperson for the organization told WUSA9 that retail food donations, which normally can be responsible for millions of dollars in help, have dropped 75 percent during the spread of the CCP virus, commonly known as novel coronavirus. As a result, the food bank had to purchase 45 truckloads of food in April, more than it usually needs to purchase in an entire year.

Last week, Texas’s San Antonio Food Bank said that about 6,000 people had registered for its food distribution on Thursday, but that it had eventually served 10,000 families, some of which had arrived the night before to just sit and wait.

Food banks in Alabama, Las Vegas, Cleveland, Boston, Los Angeles, and dozens more have seen a similar surge in residents turning to food banks amid a slowing economy resulting from the pandemic.

Despite an increasing demand for food, farmers are being forced to dump thousands of gallons of milk and fresh produce as a lack of infrastructure means they are unable to distribute it to food pantries if needed, according to a report from The New York Times.

The Produce Marketing Association, an industry trade group, estimates that about $5 billion of fresh fruits and vegetables have already been wasted, despite thousands in dire need of nutritious foods.

“We have hundreds of thousands of farmers sitting on product. Because they don’t have the financial means to ship and distribute it throughout the country, there is good, nutritious food going to waste while there are thousands of people going hungry,” CEO Cathy Burns told The Hill.