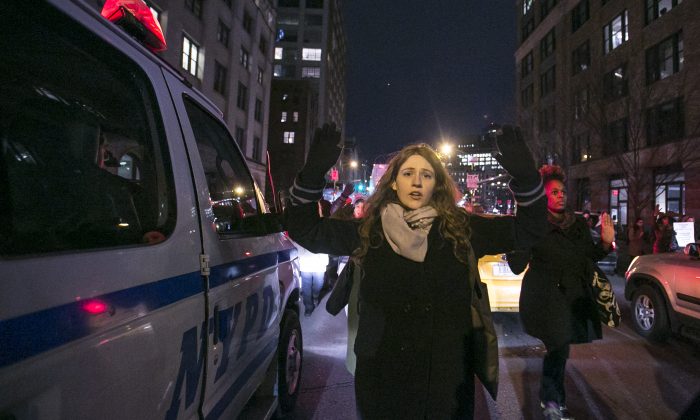 A protester puts her hands up in solidarity with Eric Garner, the black unarmed man who died after being put in a chokehold by a white police officer, during protests on Dec. 4, 2014 in Manhattan, New York. (Samira Bouaou/Epoch Times)
New York

Gentile said, “We have had enough, and we are here to support the black community, and every community in New York and across the country, who are sick and tired of what’s happening in the United States.” Helicopters over Foley Square nearly drowned out her words, and a cold wind whipped her short, blonde hair around her face.

Garner died at age 43 on July 17 on Staten Island after officer Daniel Pantaleo put him in a chokehold. Kerr said, “We need police officers that when their partner touches somebody they say, ‘Stop! That’s enough.'”

Garner reportedly sold loose cigarettes as part of his efforts to make a living after ill health forced him to leave his job at the Parks Department. Such sales are not legal, because the cigarettes sold that way are not taxed.

Project 21 member Shelby Emmett, an attorney, issued a statement about Garner’s death. “We must ask ourselves what exactly we want the police enforcing with such deadly strength. These officers confronted Garner because he was selling single cigarettes and was thus depriving the government of revenue. He was not threatening anyone’s life, starting fires, or even holding up traffic. He was not suspected of a violent crime, so such force should never have been justified. Any person concerned with individual liberty should be disgusted.”

In Union Square, marchers shouted to police, “You serve us!”

Kerr, in lower Manhattan, said she hoped the many police were there to keep everybody safe. She said she thought most of them were, but doubted that every single ‘person in uniform” had that good motive.

A large group of people marched and chanted “Hands up, don’t shoot!” and Garners last words, “I can’t breathe.”

Across the city, at least 4,000 people had gathered by 6 p.m. to protest early in the evening, according to the NYPD. In Union Square, the crowd was about 70 percent white.

By 7 p.m. the NYPD reported that the crowds of protesters around the city had doubled to 8,000 people.

Stephen, who did not give his last name said, “all these little white kids have to change things in their lives,” speaking of the protesters who might alter their racial attitudes and later grow into positions of power and influence. He has protested multiple times since this summer, and thinks it is important “to keep the passion alive.”

One among the crowd took an inward look at social change. Ian Miles said, “having conversations and gathering are a big important thing, starting from how we think about and talk about other people.”

Speaking of Garner’s death, he said, “The guy killed him. Everybody knows. It was recorded on camera. There should be justice.”

Police began barricading Foley Square so that it was not easy to enter or exit it.

Groups of hundreds of New Yorkers gathered, of every race, every ethnicity, every socioeconomic class, and all ages from babies and children to the elderly.

On Wednesday night, protesters shut down the West side Highway, and 30 people were arrested.

On Thursday night, it appeared that police had preemptively closed the highway. At Pier 40, there were no cars, and a group of police officers waited. They did not wear full riot gear, but did have helmets with face shields.

On the West Side Greenway, drivers honked their horns to show support for the marchers.

Alexis, who chose not to give her last name, said she was originally from Texas, and had been in New York a long time. She joined the protests in lower Manhattan on Thursday because: “This is a huge issue. I’m black. I have black brothers. I have black nephews, I’m concerned at how they are perceived.”

She said she wanted to see how the group was organized and to see how she could be part of the movement. In her opinion the problems that led to Eric Garner’s death and to other deaths are “systemic, but I guess I’m slightly encouraged that the mayor and the commissioner are trying to retrain the police.” But she added that she felt skeptical because she did not see how a mere three days of training “can eradicate or eliminate such a systemic problem, but at least they recognize that it is a problem.”

The federal government recognizes that there is a problem. Attorney General Eric Holder issued a statement Wednesday night in which he said: “As the brother of a retired police officer, I know in a personal way about the bravery of the men and women in uniform who put their lives at risk every day to protect public safety. The vast majority of our law enforcement officers perform their duties honorably and are committed to respecting their fellow citizens’ civil rights as they carry out their very challenging work. It is for their sake as well that we must seek to heal the breakdown in trust we have seen.”